To the among us fans lol

this was just an idea but what if we made among us in flowlab?
i know it’s going to take a while but hey it’d be cool

and though i can’t do multiplayer coz im using a free acc, i could probably try doing single player with a few computers instead, i’d have to do a lot of if’s though so i am gonna probably need some help or somehow ideas? anything would be nice

@marcelinerules someone else already had a similar idea a few days ago, go to the discussion “Flowlab be kinda sus though” and it explains everything there, although it ended up turning to a Among Us roleplay after a while, lol.

Most of the features would be possible, but how would you approach the emergency meetings?
You can’t use a mic in flowlab, but maybe you could do something with text?

Perhaps the upcoming advanced data types would help us with communication. Otherwise, we are stuck with Discord, Zoom, Meets, or whatever you use to communicate with your friends.

I actually made a little demo of Among Us. It’s nothing too big but it’s just the basics. 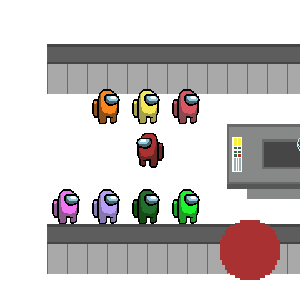 aaaahahahhaah I menitoned this fjiasraisrst
In short: I mentioned this first hahdsajdwjahdsjahahadsdaw
okay i regained my sanity, anyways, I wonder how this is gonna turn out?

this is @marcelinerules alt acc and lol seeing the above responses is interesting I didn’t know about the previous discusssions and well i have many projects going on right now, i work n a bit of all of them everynow and then, my only problem would be graphics and perhaps for now you would only be one color, also as u would be fighting CPU coz im using a free acc and not doing multiplayer though if you want to you guys could try

anyways gotta run i have to go to my next class

This was only a side project that I decided to make only a little bit of. I might not make much more after this point but it was just a way for me to see what I could code

its hard but i thinks its will be cool

Please don’t revive old topics. It clogs up the forums. Thanks for listening.