I decided to remake DUCK HUNT for the NES, but with turkeys for Thanksgiving.
I pulled it off in a day, no problem. Hope you guys have fun, post your highest scores.

Turk Hunt is 95% completed, and does have a few bugs.
Built this in about 6 hours or so. I’ve been mostly playing it and bugtesting it.
It’s very playable for the most part, but occasionally a turkey will not emit for no obvious reason.
You get 4 bullets and 12 seconds per round, aim very carefully, and shoot when they are running or moving slowly.
The faster you kill them, the bigger your BONUS
Every 5 rounds increases the chance of more turkeys. After level 20, you will start having 4 turkeys, so every bullet counts.
Spacebar and Enter pause the game, you can click on Give Up if you have to. Sometimes turkeys won’t spawn… It’s a timer bug. I can’t fix it.
After going under -2000 points, you get a Game Over.
Hold A and S to reset your highscore.
Press X to use a TurkeyCall for -400 points.
Press Z to Reload!!! for -700 points.

Oh, true. Well you can still play my Turk Hunt game if I make it, shoot 8bit turkeys, just because.

I got maybe 1 hour of sleep lol
No such luck 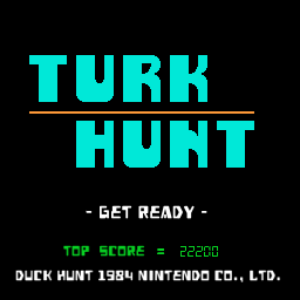 Added test ducks until I make them turkeys. Remember, they are turkeys. Turkeys do not fly. They will run along the ground and jump flap around like crazy. It will get harder and crazier each level. You only get 4 bullets instead of 3 like Duck Hunt. Why? Turkeys are fast.

Made the first turkey sprite. I wanted to keep the traditional style of the graphics.
I’ll do the others after I eat.

@CrimsonBlackGames Called it. The only day I want a nice day outside, and it never is.

I Guess thats why they say theres only two seasons… dry season, and wet season

Added all that named stuff above except new turkey types.
I added Give Up to the Pause screen (Enter or Spacebar) which saves your score and returns you to the Title screen so you can restart if you are having a bad game.

Thanks! Sorry it’s buggy. I can’t seem to stop it. I’m going to say 100% that timers are bugged in flowlab, because they never actually sync correctly. I can prove this because the dog barks a different amount of times, instead of always barking 3 times like I set it to do. Also, sometimes when you shoot a turkey, a different turkey dies instead. This is another bug in flowlab that happens to cloned objects. It also really affects and ruins groups of proximity. I can’t do anything about it, only @grazer can fix that.

Added a TurkeyCall. Press X to mimic a turkey, and more will fly into the stage.
Calling turkeys costs -400 points, and takes 10 seconds to recharge.
This tiny green turns red when used, and back to green when ready.
Turkey calling is useful for if a turkey didn’t spawn, or if you need extra turkeys, because you want to increase your chances of shooting one so you don’t lose -1000 points for a Got Away.

I seem to have fixed all the bugs, including the annoying missing turkey bug. Let me know if any of you end up in a round with less turkeys than required, or no turkeys or dog spawns. Otherwise, I fixed every bug I could find. If you do run into the missing turkey bug, the TurkeyCall should fix it.