Why won't this proximity block trigger?

In this game I started to work on I want the enemy to detect when it is in (or touching) the yellow object. The yellow object is attached to another object and it is using the size behavior, if that has anything to do with it. The enemy should stop if the proximity is triggered 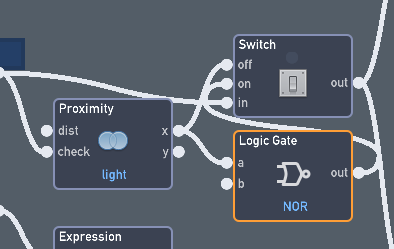 Tried this, but it still didn’t work.
Might have to use that sussy @ key to summon the all holy one…

On the phone and can’t check the details. But you mentioned ‘attached’?
Attached objects don’t have a collision box, as in, can’t be detected?
As said, can’t see what you got in the code, just throwing it out there

The proximity block is working just fine, but everything you have around it is all out of wack. What do you want the enemy to do when it’s in the light? Right now its just a ton of unnecessary code. @TinkerSmith is right about attached objects, but your not really using collisions so I wouldn’t worry about it.

Instead of using an attached object, just make a normal object that extracts the base objects x and y cords which places it on top of the base object you want the shield to be around.
Then you could add code when to spawn and delete it using the messaging and spawning behaviors.

ok, so I stopped using the attach behavior and after a bunch of messing around with trig functions I got it to work, mostly. As always, trig messes up when it comes to 0’s and 180’s, so does anyone know an effective way of making a full 360 degree transition?
All the code for the rotation is in the light object
also it will not be visible in game so the appearance doesn’t matter, I just don’t want anything to detect it going haywire