A tribute to Scott 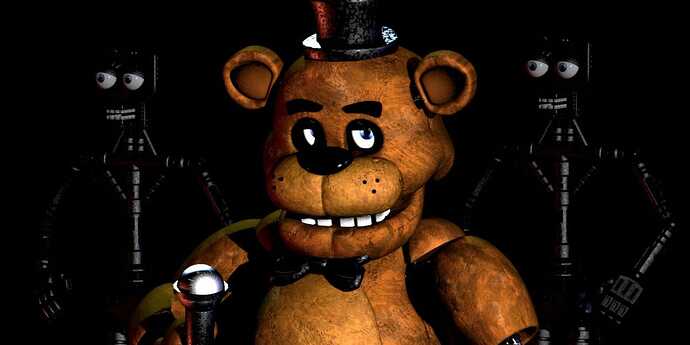 Five Nights at Freddy's creator Scott Cawthon announced his retirement about a week after outrage erupted over his donations to Republican lawmakers.

Unfortunately, it seems that Five Nights at Freddy’s is ending, permanently. This is solely due to death threats and similar attacks from the radical left. I don’t care what side of the political aisle you prefer to sit on, this is not only an outrage from an American and Western perspective, but this is crimes against humanity. A man is forced to end his career of exciting, stimulating games throughout the decades because of his personal beliefs. That is not just in any sense of the word. Let us come together to give one last tribute to an indie game developer who has entertained many and personally inspired me to create games. Farewell Scott!

He’s retiring? I didn’t know it would be that extreme. Well, bye bye Scott I guess. Also, is Security Breach cancelled?

I would like to say my farewells to Scott Cawthon, too. If FNAF didn’t exist, neither would Porky’s Nightmare. Even though it is one of my least favorite projects, I still had a blast making it (and terrorizing my friends with it).

Also, just a little sidenote, Scott’s retirement isn’t the death of Five Nights at Freddy’s. If you look at Cawthon’s website, scottgames.com, you will see his farewell letter. If, for whatever reason, you cannot see it, here is a screenshot of the whole message.

While he makes no mention of the backlash he has received, he also said that he is retiring because he wants to focus on his family life (the champion currently has six children, one of them currently unborn). He says he is passing the torch to someone else of his choosing, so FNAF will still continue, just with a different director. Let’s hope that the new director can keep FNAF’s legacy, and not screw it up. And besides, FNAF has a growing fanbase, with new FNAF fan-projects being created almost every day (just like Porky’s Nightmare once was).

Furthermore, even though I was disheartened to hear that Scott has donated to some people who I vehemently disagree with, I do not believe that these donations reflect Scott as a person and a human being. He is still a great guy, and one of the few game developers who truly appreciates his community and fans. I find it very heartbreaking to hear that someone would receive death threats or be harassed simply due to their past or their political beliefs. People who behave this way to their enemies or rivals are no better than the people they are attacking. Hopefully, nobody in this forum would be terrible enough to behave this way should a similar controversy arrive here.

Goodbye Scott, never played your games but apparently they were good.

The only one of Scott’s games I actually played was FNAF World. I don’t understand the hate it got, because it was quite decent.

Okay, “hate” may be a strong word, but it wasn’t the most liked game either way…

Exactly. Even if you disagree with his politics, that doesn’t mean he’s evil or wrong.

Why do you have to refer to them as the radical left?

Can’t you just say “people”? Specifying the political side only biases your statement, when you can avoid that easily it just makes no sense to talk like that. He also wasn’t forced to quit what he loves… nobody said that. Are they clearly pressuring him to quit? Yes, yes they are… but they aren’t forcing him.

Because the radical left are the people who did it. In the words of scott, “if i get cancelled I get cancelled,” but we’re not going to just roll over.

They’re giving him death threats, I’d count that as forcing.

If I give you a death threat over the internet would you take it seriously? I wouldn’t.

I think you should call them the radical left when they start killing people.

It’s still biased, and that’s my point. I get where you’re coming from but I feel like every political thing you post is biased in a way.

When a person know where you live and wants to kill you I will not let that happen, internet or not. It’s unacceptable

Yeah, the situation is very unacceptable. Agreed, let’s end it there-

Hey Guys, I’m bummed out that Scott is getting all this hate and retiring as well. Because the subject is political, it’s going to be tough to discuss the issue without getting into political arguments, but lets try.

I’ll leave the thread open for now, but if it devolves into tribal bickering I’ll have to lock it

I’m biased towards not allowing crimes against humanity, and I’ll speak out when I see it. This is my first “political” solely based.post, and it’s because it’s related to game development.

That’s honestly dumb how he supports one political side like everyone else in this nation does and he gets penalized for it. That’s just so wrong.

I know you tend to lean right, but that weakens your argument. You’ve made it clear on the wiki that you’re a conservative, which making that public leads to bias.

It’s not ‘radical’ to be mad at someone because they hate gay people. I don’t support Scott Cawthon at all for those choices he’s made, but I don’t deny that he’s a good developer, because he is. It’s radical to attack he and his family in the way that they did, but going ahead and saying it was only leftists is absurd.

Alright guys before this turns into a huge argument I’m going to attempt to end the thread here. Although the subject is tragic I believe we’ve said enough, and should just move on. You can believe whatever you want and I usually won’t judge you for it, but I know there are a lot of people who will and we’re just going to have to deal with that. So now that my opinion is out there I think its time we let the thread die.

This argument already went and gone like an hour ago, so idk why you have to bring it up and start adding more points into the mix that may cause even more arguments. Which this isn’t the first time you had to have the final say so could you please realize the situation is already over and not continue it any further.

Then again I’m guilty as well for posting this, but it seems that no matter what I say someone’s gonna get offended. I’m just tired of everyone dragging arguments longer than they should be.
This whole discussion was mainly a tribute for Scott cawthon and yes there was a little bit of a debate, but it seems like you target meburningslime literally every chance you get, and not only him, literally anyone in the otc. I understand if you have a valid point or an opinion worth sharing, but that doesn’t mean you directly attack someone every time they have an opinion that you disagree with.
So please, when an argument is finished or is wrapping up, the just drop it.

Woah woah, there guys. We don’t want another locked discussion now, especially when it’s something like this.

As conservative leaning myself (though I consider myself very open minded with several different things, so I don’t really affiliate with one group), I find the situation a nasty one and really just showed the ugliness and political bias of the human race on the internet. Scott definitely didn’t deserve it, we know. But he got whatever he got nonetheless, and I’m sure he’ll be more comfortable because of it, seeing his message to the community.

We all believe different things here - so let’s do something that Twitter can’t and accept our differences.