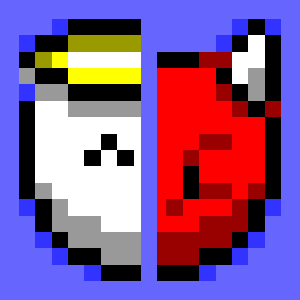 just like the classic camp game "mafia" the objective is to find the demon. each round a new character will be killed, unless the angel saves them.

It’s a simple game, but I enjoy the juxtaposition of the “cute” characters and fonts to the overall theme of mortality. I wanted to mess around with modifying list blocks as the game is progressing, and also utilize global blocks (as I have not used them before).

However, I have found a glitch in the game… some times the game will not allow you to click on a character(s). I can’t find a pattern to which character it is or when, but I noticed it seems to happen around round six.

Please let me know what you think of the game and if you have any ideas as to what may be causing my issue.

i would but it seems my flowlab is broken or something

I think this is a neat little game (and, yeah, I found that bug you mentioned, but I couldn’t find the problem). I think it would be cool to add a little more life into the game, as the little emotes, although a step in the right direction, are not really enough. There are a bajillion-and-one ways you could do this, and I think exploring some of them would benefit your game greatly!

I like the transitions and the word-size-shifting (I have no idea what it’s called) and I think more polish like this would help flowlab games immensely.

Like I mentioned earlier, the atmosphere appears very dead, and the music doesn’t really fit the mafia theme so well. It gives me a feeling similar to when you assassinate an npc in Oblivion, and the music keeps playing, ruining the significance of what just happened. It may be good music, it just doesn’t fit.
Now, ways you could improve the atmosphere are simpler: fill in the holes you left when you designed the game. Questions like ‘how were they killed’, ‘what were they doing before death’, and ‘which player(s) look suspicious based on the given circumstances’ could all be answered.

Reading back on this, I notice that you didn’t really ask for any of this, but, since it took me along time, may help you out, and isn’t hurting anyone if I post it, I think I’ll include it.

All in all, I think the games strengths are really noticeable: The game is polished, the characters and their animations are neat, and the transition between levels is a smooth one. But I also think that there are major weaknesses to it as well: The game leaves the player feeling empty, like little was accomplished.

I think the theme was to be a cute but a not so innocent game, so I don’t think the mafia style music should be included.

Thanks @DarkStar_Studios, I was actually considering making death scenes. I think using these emoji characters in graphic death scenes would be funny.

@DinoDev I really like the idea of using more upbeat music, thanks for the idea.

Any ideas on what’s causing my glitch?

So, while I was looking for that bug, I found others:

I wasn’t able to find the infamous bug, but, if it helps, it happened on round three for me, and was a rare occurrence.

Thanks again, I’ll look at eliminating the clicking of dying characters; and it was easier to have the angel simply be the previous demon, as it only has a 25% chance of saving, and the player wouldn’t know who the previous demon is during the game.

I’m still digging but can’t figure out what I’ve done to make the click work so sporadically.