Are there Level limits?

I couldn’t find this anywhere, but is there a max amount of levels in a game, cuz I might end up reaching 400+ and it would be cool if that’s actually possible.

If you plan to have a game that has even more than 20 or so consecutive levels, then you might want to consider randomly generated stages along with the occasional main plot stages (if you have specific rooms you only need one of). That way the game can be infinitely generated to a large number for however many levels you need.

making new levels is significantly easier, is there really a big issue with lots of levels?
Because so far it hasn’t caused many issues and I have over 140 levels.

I asked grazer about this rn, he’ll probably respond in the morning.

I don’t know why you’d have that many levels, imo if you’re doing that much you could probably create an assistive precise system with lists to create levels with just number inputs, so you can use only a few levels for what accounts for a lot of gameplay.

I’m no grazer, but adding more of anything will cause more issues with performance. Simple as that.

I mean, Every level is formatted differently, and I didn’t wanna go through the effort of making levels the same, and spawning each individual tile for every “Level”
It would just take a significantly longer amount of time, and I’m already slow at developing.

i would actually argue that performance would be better spread between less levels. that would mean less math being done, less complex systems, and more able to be loaded with good performance.

for example, games like beyond the glass are really hard to use in the editor due to their sheer size. cutting up the levels is not a bad idea

Beyond the Glass worked well for me on a mac, but splitting up levels should help performance (But for beyond the glass having a lot of levels didn’t really fit what we wanted for the game). Having it all in 1 generated level is probably even better (though that may just be for initial start-up)

Yeah I just meant the load time for a game to start is longer when you have any amount of levels with objects in them and you keep adding to that.

I wasn’t talking about in-level performance in general 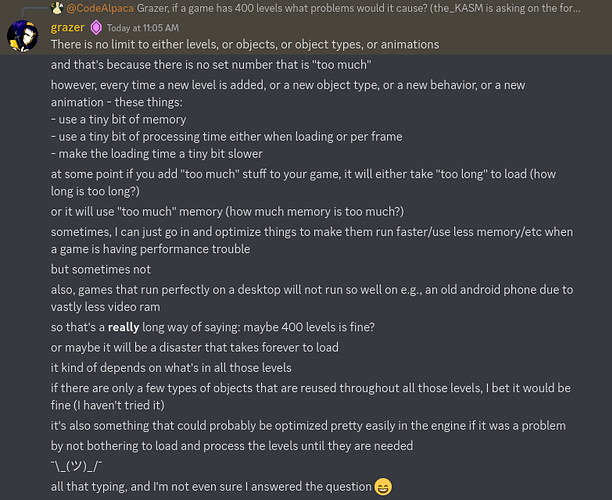 This helps a lot, I’m using a 10 year old mac desktop that can hardly run terraria. So I think if it’s working for me it should be fine.
Thank you so much for helping!!!