Made another ai example game.
https://flowlab.io/game/play/2166059
This thing is difficult.
This one is… basically trying to get clips to post on Youtube.
It has a ton of ball control and skill.
Issues with it:
Corners.
Own goal-ing since it really doesn’t know how to ‘take a shot’, it just moves the sword accordingly to the ball, not the net.

Controls:
F for fullscreen
E & Q to rotate sword
Your gray sword follows your mouse, defend the left net.
No limit of the scoring. Play to whatever you want.

if you could move with teleportation the game wouldn’t work
it would literally just be hyper speed wars
no defense or offense, just moving at a ball.
also, it has to use velocity to move so it can transfer it’s force.

Oh ok. I completely understand that the way you made the player movement is this game is correct.

I’ve basically redone the game. New looks, ai fixes, a scoreboard with a timer and an infinite overtime system, fan applauses on close shots and goals, and more. Tell me what you think! What should I add?

What should I add?

Tell me what you think!

Still trying to figure out what I can use for a ball sprite. For now I’m using an old sprite from an old game.

My first OT2 game. It destroyed me in OT5 (OT does not end on first goal scored, rather it continues if at the end of the time it’s a tie still) 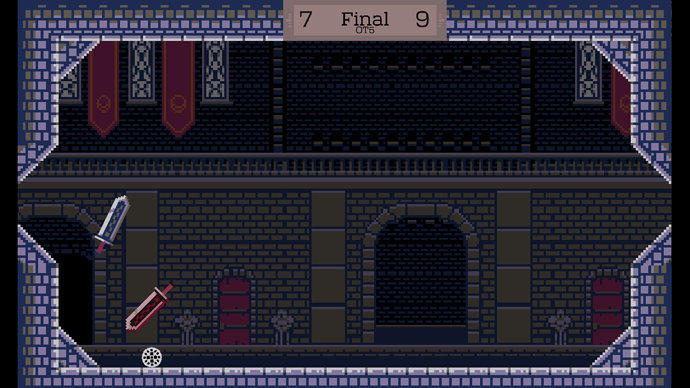