Bug Hunter’s coins system for shopping been there since almost the beginning. I had no problem getting coins because I playtest it all the time

, but I was wondering, is anything too expensive/cheap, too unbalanced, anything really that makes getting coins or spending coins too easy or difficult.

Also, if you have time or you want to feel free to leave some feedback so that I can improve my game. Feedback like Gameplay and Upgrades are the best.

Anyways, thanks for trying out my game and leaving some feedback for me 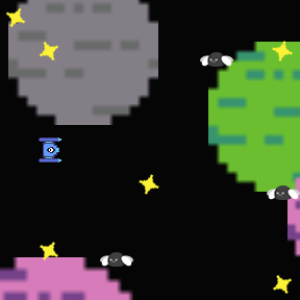 I’m going to bed now. So I won’t be responding anytime soon

I would be a little bit more specific than that, KiwiLeaf.

Anyways, this is from an old post I made when I initially reviewed my game, but this is what I think of the art:

"The art is really well done. It’s simplistic, but the way it is used is great. I also like the particle effects in the title screen, though I wish that there were more particles in the rest of the game.

The use of default enemy designs for the bugs also disappointed me a bit, but I’ll let it slide since they fit the overall artstyle. Also, the explosion needs animation, as it just looks like an inanimate fireball that grows."

Right now, since it’s been a while since I last played the game, I cannot give advice on the currency of the game. I’ll get back to you when I do.

Yeah, I understand the art isn’t really the best

. I’m not really a good artist so I never really focused on the art section, I was planning to update the shop’s look first.

Do you have a list on what you think should be updated first?

Thanks for your feedback, and KiwiLeaf’s!

I would first of all tryto keeps the same size of pixels betwen all of your sprites. Then focus on making them all the same style.

Hmm… I could try, I guess

Since your game is a space game you can use a simplistic style.