Can someone PLEASE tell me how to make a enemy ai

i’m thinking about adding a enemy to my game can someone give me a hand? 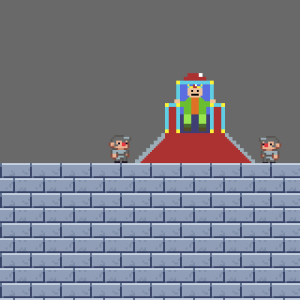 remember the space "adventure"This you play as a guard and the king needs your help! there's a monster on the loose,can you defeat it?

Do that to the enemy and rezise proximity

Basically, Si-Guy made a thing that says:
If the player is close to me, extract my X position and their X position. If they’re X position is greater (they’re ahead of me), then set velocity to 4. Otherwise, set it to negative four.

Another good step to take:
Take out a Logic Gate. Switch it to NOR. Attach it to the X of the proximity. Attach a number (keep it at zero) to that NOR gate. Attach the number to the velocity and the Back of the flip.
Basically, NOR gates get triggered when nothing is triggering them. Confused? Let’s say you put a nor gate on the proximity. When the proximity senses something, it’ll trigger all things attached. However, if it isn’t currently sensing something, it won’t trigger anything BUT the NOR gate (and other logic gates, but you’ll learn that later), which makes the NOR gate get the number, which sets the velocity to 0. Basically, if the player isn’t nearby, just stop moving.

Also, you can remove that extract on the bottom and just put the X of the proximity in the Value of the filter. Also, set the proximity to whatever your player sprite is.

okay i’ll do it. it will take long though