Celebrating 5,000 plays on Beard Your Own Adventure

To celebrate 5,000 plays from the Flowlab homepage, I’ve posted a lengthy postmortem breakdown including the original mini-comic outline from 2014 and dev notes and sketches from the two weeks of the jam. If you are interested in pawing through my brain dumpster, give it a click!

Beard Your Own Adventure Postmortem 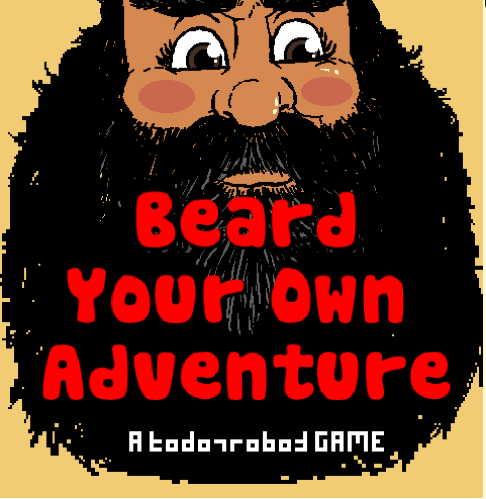 Nice! I like your games! I am still trying to master time bomb… I like that game even though I am terrible at it!

I still really like Time Bomb too. I’m glad somebody else out there is into it. It wasn’t working for a while bc some update or another glitched out the guide, (which is of utmost importance), but now it is functional again. The game is definitely beatable – though tbh I don’t know if I ever heard of anyone getting to the win screen. Maybe @JR_01beat it. I can’t remember. You could be the first?

Now that routers are a block, I feel that updating this game might be back in the cards. I had more components and even a between bombs story line cooked up in my head that never made it during the jam. Unfortunately this was built before I knew how to handle bundles and equations, so the blocks are spiderweb spaghetti and I’d have to rebuild from scratch. Maybe eventually.

It reminds me of the game “please, don’t touch anything,” only 1000x more stressful.

As if that game wasn’t stressful enough

Honestly if the controls were more reliable it’d be 900% more fun.

you gotta be reeeal careful with a soldering iron

Well like it took me 50% of the time just unscrewing. I haven’t even touched the soddering iron.

well, I never got around to adding the pattern specific unscrewing order that made them faster or slower to unscrew if you were paying attention or not. it was originally going to be indicated on the screw panel covers.

I’m not sure what that means… But I tried the game again and just barely finished unscrewing everything before the bomb went off, but idk how to remove the lid. Back to the instructions…

you have to put your screwdriver back and select the pointer tool to remove the lid – like in the tutorial.

Lol, idk how I missed that.

That’s what I mean. The controls are pretty good, when they work. I know I totally botched that sodder thing tho lol

Yeah. There’s a finicky sweet spot between mouse and the “tool trigger” at the very bottom of the screen because the mouse is offset from the trigger spawn. Definitely not the best, but the code is such a mess that even if I could find the offset, I’d be scared to edit it for fear of breaking the whole thing. Planning to address the issue in a future Time Bomb expansion if I ever get around to it.

It is beatable even with the janky controls.

This game is hard…