I have two areas in my game that need an event to trigger when the player touches a specific object. When I switch levels the object isn’t there so it becomes blank and activates with all of the objects. Is there a way to prevent this?

So basically you have a switch to open a door. That door is also in level 2.
In level 2 there is no switch so the door is open?

The objects to trigger this are in multiple places but only one should trigger it. I made it do this but then when in one level the other item isn’t there so its trigger becomes general. This makes the door lock before you get in.

are you using globals? A screenshot would help, I don’t think I’m fully understanding what you’re saying 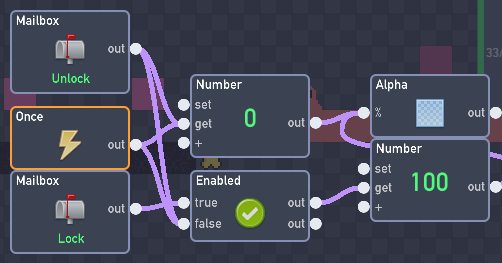 I loaded a level without either of the items in them so it removed the specific trigger and made it activate for every copy of the object.

The once is making it start unlocked, but if the object has a collision with the ground it locks the door.

That makes sense, if it doesn’t have them, why would you get an output from it?

But it makes it so that when I go back to the level that does have it auto-locks the second you move onto a block with the same name so instantly. I can’t get one of them to work without breaking the other.

Can you link the game or pm it to me if it’s private?