Consistent Bugs:
importing gifs leads to many frames being cut off
spawned objects cannot use parents’ mouseclicks
when undoing and redoing a paste, bundles will double inputs and outputs
mousemove and camera zoom do not work well together (grazer has fixed this but never deployed the update for some reason)
polygon hitbox isn’t accurate (not really a bug but an overlooked feature, a pixel art based hitbox would be nice)
spawned physics objects slow physics down extremely badly despite not slowing down fps

Inconsistent Bugs:
Random glitchy colours in the editor instead of lines
sometimes max fps will be limited to 36 after editing for a while instead of 60
sounds looping has large breaks before it
importing list behaviours sometimes cuts wires

(not really a bug but an overlooked feature, a pixel art based hitbox would be nice)

Huh? I thought that the polygon hitbox was already art based? It would generate the hitbox based off of what the sprite art is (for example, if you create an octagon, the hitbox would be roughly octagon shaped).

it does do that but it has many inaccuracies such as 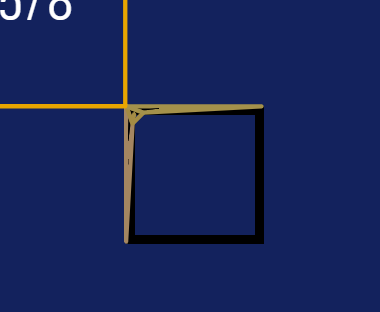 this terrible attempt at a polygon, plus it’s not very accurate on bigger objects

He fixed mouse click interactions with zoomed objects, not the mouse position values.
Which I’m sure has separate handlers, but the current version is updated to what he had.

Although, he should fix the zoom mouse values since I’ve made a bundle fix for it.
(Also when he does fix this, only game mouse coordinates would be affected to zoom)

Kind of obscure, but on mobile I still cannot cut wires…at all. I even found a stylus to see if it makes a difference and nope, still doesn’t. Clicking a red wire just brings up the “Import / Cancel” menu.
I’m not sure if it’s just an issue with my type of phone (it’s an android) so if anyone wants to test it on their phone that would be good…

Unable to click to delete wires in between behaviors.
(Inconsistent)

I found that on mobile and even on pc, when you try to cut the wires, you can even click them unless you zoom out in the editor.