You mean like a custom level maker or something like that? I’m sorry @Jsoft_Studios, but I don’t know how to do that. Good luck on your game though!

Also, try making a new discussion if you want help. It is going to be easier for other people to see, and they won’t have to dig through devlog after devlog to try to answer your question.

ok!!! I added all those exclemation marks because the reply must be 20 characters.

here is the link to my game

we need a wendigo class
because who doesn’t like a good cannibalistic monster?

Come to think of it, some wendigos are considered spirits, similar to all the other classes. I’ll see what I can do.

Player Controls - the Basics
So far, I am planning on adding the following controls for the game:

If you’re wondering why there are two sets of controls for each action (with the exception for Finisher and Use Item), this is because some players who may play the game are left-handed/southpaw. Plus, I know a few of you favor arrow key controls over the classic WASD. Dark Ninja is a game meant for all audiences, no matter their ethnicity, race, social status, etc, and having lefty controls helps pursue that goal. Although, if you are sensitive to mild blood violence (which I think is very few of you) or the concept of peace versus suffering, player discretion is advised…

Don’t worry, more complex movesets - such as wall jumping - are planned, but these are just the basic controls.

Only 4 days left until the end of the poll! Looks like for now there is a leading two-way tie between phantoms and reapers.

As promised, today is the day I will reveal the Phantom class. @browngr, @rcreger, @edwardi, and @Johnny_Boy all voted for the Phantom class, getting the majority vote for the discussion on this enemy class.

What part do Phantoms play in Dark Ninja? They appear green with no horns and no legs. Phantoms do not interact much with other enemies, and they are immune to heavy attacks and finishers. The only exception are bosses that are part of the Phantom class. Those guys can be injured by heavy attacks, but not finishers. This means that attempting to attack a Phantom with a heavy or a finisher will result in a failed attempt… and a waste of energy.
Furthermore, Phantoms can pass through solid objects (including other enemies), and will attempt to reach the player. Phantoms prefer to act alone and ignore other enemies, even ignoring support abilities created by enemies. They themselves do not have support abilities of their own. In some ways, they are rather selfish, but they always respect the authority that the Prince of Pain has over them (for those who haven’t read the topic description yet, the Prince of Pain is the main antagonist).

Up next are the Geist and Reaper classes!

Don’t worry, I am adding the Reaper class. All of the classes mentioned in the vote will be added. The only class that is not yet confirmed is the Wendigo class @theglitch055 requested. I’m still considering whether a Wendigo enemy should be part of the Wraith class, or if it should be its own independent class.

The thing is that I want to make sure there aren’t too many classes. The game kind of has a thing with the number 7. There are seven heroes, seven enemy classes, and seven levels for every world map (there are two world maps, with two more being added as a side-adventure after launch). Besides, most of the creatures in the game are personifications of evil and darkness, and are ghostly or demonic in nature. While dragons are also a symbol of evil in some myths, they aren’t ghosts or demons. And some dragons are even good creatures, assisting heroes in their fight for peace.

So to answer your question, I don’t know if I will consider adding any other classes besides Wendigo. Even if I did, a Dragon class won’t fit in much.

In Dark Ninja, Geists are usually white with large heads containing a rune on their forehead. Attacking a Geist from above (such as slashing their head or jumping on them) will deal critical damage. Geists have the ability to pick up surrounding terrain and chuck them at the player. All Geist attacks are ranged, and they occasionally support other enemies by picking them up and yeeting them at you. I am not sure how that is considered a support ability, but in the end, that monster who got yeeted got to punch you in the face. Although I am not sure if they are happy with being picked up and thrown, especially since thrown enemies die after colliding with something, even if they hit you.

New Enemy Class “Reaper” Reveal
@browngr, @edwardi, and @Ramshacklegamestudios all voted for this class. @Haevoc has also shown support for the Reapers.

In Dark Ninja, Reapers are orange in color and lack feet. Only one Reaper enemy is capable of flight, only one is capable of locomotion, and only one is stationary. This makes the Reaper class one of the most varied classes, besides the Banshee. Reapers are similar to Demons, though. A Demon’s attack damage is based on the function y = 2x, where x is the amount of times they hit you, and y being the damage output. In the words of @spencertheball, they attack you with a nerf gun, then quickly go nuclear with their shots. However, Reaper’s attack damage is based on the function y = x2, with the same rules. They don’t kill you as quickly as Demons do, but they are a force to be reckoned with.

The Demon first attacks you with a nerf gun, then a paintball gun, then a handgun, then a shotgun, then a rocket launcher, then a nuclear bomb.
simple enough?

Now apply this same logic with Reapers, and you get your result.

HA My logic holds out!

Now I also want to do another poll. Well, set of polls, since there is two.

Which Enemy Reveal should I do next?

Should a Wendigo Class be added?

Thanks @spencertheball. I’m happy to see that you are intrigued in this project!

Only two days left to vote for which monster class I should talk about (or just say forget it and demand some art), and whether Wendigos should be independent or part of an already existing class!

So far the Wraith is winning in the first poll, and everybody wants the Wendigos to be part of an already existing class.

So the results are in: more people want to hear about the Wraith than the Banshees, and would like to wait a little while before they get any art reveals. @spencertheball, @ManiacPumpkin, @Caden9, and @MrMcMemerMan.

As for the second poll, it is official: the Wendigo enemy will be classified as a Wraith, and won’t be its own independent class. @spencertheball, @ManiacPumpkin, @browngr, @rcreger, and @Ramshacklegamestudios

Expect a reveal about the Wraith behaviors on Monday, and expect for the Banshee to come next Saturday. As for the art reveal…
Even though it lost in 2nd place, I think it would be a little better if I at least post some game art. So I decided to post Zone 1 of the World Map. 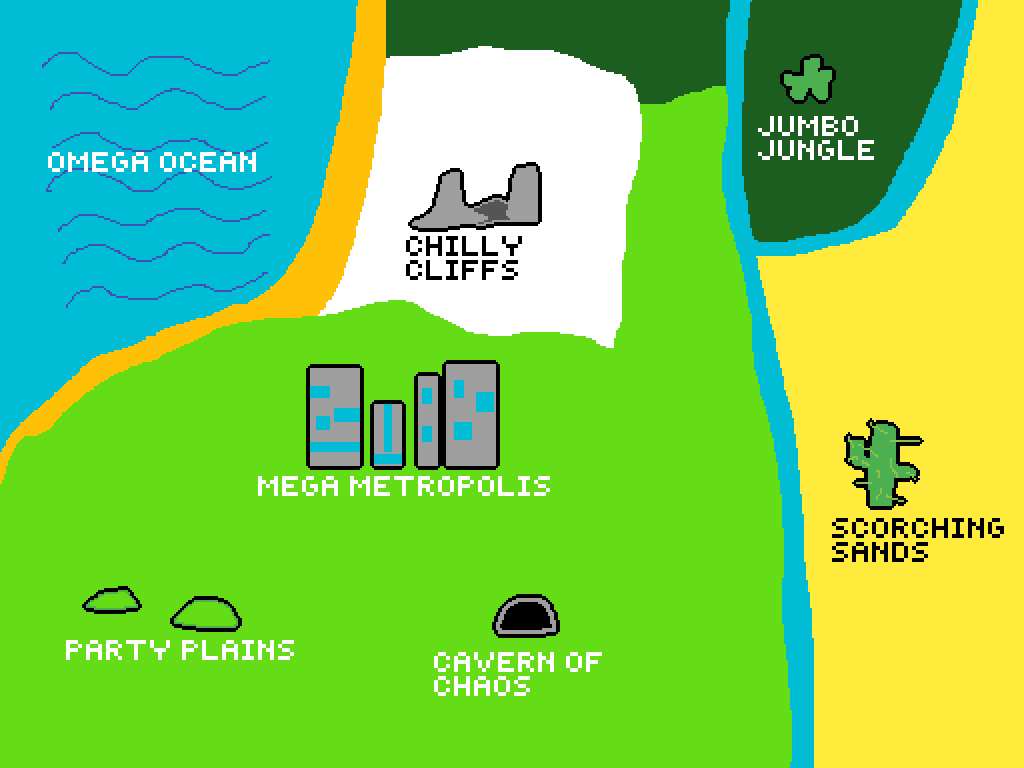 (In order of when the player will play the level) Party Plains, Mega Metropolis, Chilly Cliffs, Omega Ocean, Jumbo Jungle, Scorching Sands, and Cavern of Chaos (the Cavern of Chaos is an optional level and does not need to be cleared)

So @rcreger, @meburningslime, and @Ramshacklegamestudios, even though you lost the vote, at least you got what you wanted. I think…

I know that the level order does not really go in a straight line, and more like a squiggly line, but the path forward is never a straight line anyways…