AND THE THEME FOR THIS WEEK FLOWJAM IS

Hands to work!
You can now start building your game within this theme.
A reminder: The games will be base-evaluated in 3 main things ART, GAMEPLAY and FLOW.
Send the link of your game to here in the next sunday ( day 06/ month 05/ 2018)
Have fun and Good luck!

Everyone can still enter and make the game within the theme and send in a week.

I announced this for you. Grazer will have to delete the other topic, I don’t have the ability to edit announcements. I can only make announcements.

Some progress today on a map generator, it paints a river that squiggles upward to the top from a random bottom position, areas beside the water become sand, then depending on which side the river is, some squiggly mountains are drawn opposite. Then empty tiles becomes grass, some trees are randomly spawned in, they squiggle about making forests, then a castle is randomly placed. If the castle is spawned on top of water, trees, or mountain it will relocate itself to the nearest grass block. I think that is good enough for making a map, will be a little different each time.

The goal tomorrow is spawning some starting buildings around the castle, some workers, and then resource management, making the workers chop wood, bring it to castle, keep track of how much wood, etc. I dont know how building things will work yet even though that’s the theme lol

Note to everyone: I’m not sure if you guys wanted me to judge this Flowjam too, but I’m going to have pretty spotty internet access on Sunday and Monday, so it may be Tuesday before I’m able to post a winner

Yes we wanted you. You are a good judge so we wait till you can evaluate no problem @grazer

@Wizardry interesting. Is it automatic or the player have to do it himself?

Spent all night working on sprites, logic, music, and even box art for fun.
I’ll probably improve and finish this game for android after flowjam.
Lot of stuff still left to do. Idk if I have enough free time to finish. 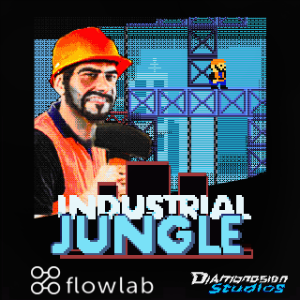 Haha nice artwork, what gameplay elements might you be trying for?

Thanks, I’m doing a construction platforming puzzle survival game based on slightly better NES limitations. I even added screen glare and antianalizing scanlines to really give it that retro feel. Even the music only has a few notes. Imagine an advanced infinitely randomizing level “Donkey Kong” but if he let loose the whole zoo, and the angry construction guy had to deal with all the animals. No two playthroughs will be the same.

Little ant workers muwahahaa. I call them slaves and that’s all they will do, just haul things around

Some unexpected things happened that I like. First is they return to the nearest storage building which can change depending on where they picked up the item, and second they change target when their target item is picked up. They also have random movement that makes the crawl around and looks funny

Left a faster test from earlier today, and the Right a slower more realistic test of what I’m currently at

@“Mhx Ar” I knew you couldn’t resist the lure of a free Flowlab sticker…ha! : )

https://image.ibb.co/cJ2cPS/workers_and_building.gif
Controls I decided on are WASD for cursor movement, and Up/Down for the right selector, maybe SPACE or ENTER for build. Was trying out easy ways for an interface and ended up with this, a cursor over the left world, and an up/down selector for the right-side build menu. None of the buildings do anything yet, the food silos do spawn slaves though without any initial food to haul they’ll just run to 0,0 x/y. I spammed the silos for a bit, but it didn’t lag with all those guys crawling around so that’s good

Yasss! I just got an awesome decent idea for a game. Finally
Yesterday I had to stand up from my bed and write down the idea so I wouldn’t forget it haha.

I won’t spoil but I have great feelings about this.

Here’s some unit testing: https://i.imgur.com/VC2ds49.gif
Simple health and collision damage, and they just move towards the nearest enemy. The green things on the soldiers are like identifying tags, all your units will have those, same with enemies, buildings, and resources. It lets you group various objects for navigation purposes into things like enemy, friendly, building, resource. so instead of building logic trying to detect all the various kinds of units and buildings and resources and enemies, you can just use anything with that tag

I have problems with using NOR or NAND logic paired with a proximity or other similar continuous input, I like using them to detect when the input is off, but it never turns its output off correctly. Is there some kind of trick for it? I will try finding examples.

Edit: Nevermind, it just seems to be a bug when the input is coming from messages

@Wizardry
Actually, Always seems to break through logic gates and on/off switches for me as well, so maybe there is a bug for continuious. It doesn’t happen with timer, though, and position stops moving after a few pixels if set to move at -1 x or y.

Definitely some bugs to look into and add to the list.

Actually yeah now that you mention it, I remember switches being fed a continuous input continue outputting even when the switch is turned off in the same way as this