The gaming end of Flowlab has been blocked in my school district, Considering this website is tailored towards classrooms, isn’t this an issue?
I’m pretty mad, but at least the forums is still available.

that’s pretty annoying, you could always ask to have it unblocked, saying it’s for educational/coding purposes, and your admin will probably unblock it. i think other people have done this before.

I’m not really sure who to go to for this, But thanks for the idea.

The IT administrators has to unblock Flowlab for that school.
Schools that use Flowlab in the classroom would usually have it manually unblocked.
My only suggestion is to try to talk to your Principal or Technology Director on unblocking it.
Other than that, there isn’t anything you can do as long you’re on that school’s internet.

I’m actually an IT admin of a local school and have Flowlab unblocked manually because I use it and I see it as an educational site. But yeah in most school filters, Flowlab is filtered as a “game” site and will automatically be blocked.

This happened to me too, so now I’m just stuck on the Forums until the school unblocks it

It’s a really obnoxious issue, where do you live? maybe we live nearby?

i got the gnome guy chewing on a wire 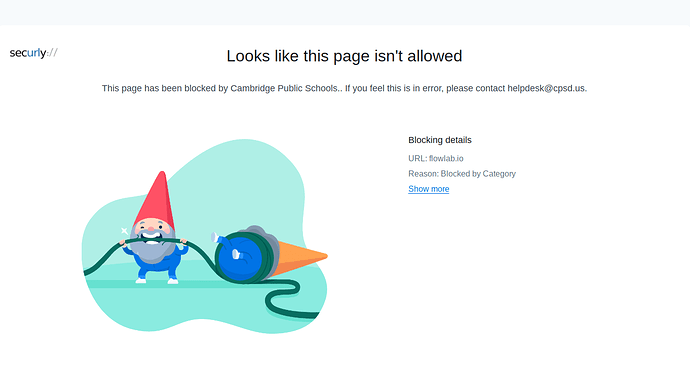 This picture is my least favorite thing now. I was debating getting my Chromebook off of the school admin, but it doesn’t seem to work.

Offtopic but I just hate blockers in general.

Sorry to intrude. I just despise blockers. And it sucks flowlab is labelled “games” because you can go inside said games and learn how they work.

And as an IT admin, here are my responses to those. But right quick, firstly understand on top of the filtering, the basics of what’s allowed on a school’s network is regulated by the government and the software (firewalls, antivirus, network filters) are all done by third party and have their own systems to tagging and blocking websites automatically. Iboss and Gogaurdian just to name a few.

Flowlab may be a learning tool, but most school without a game or computer class will see Flowlab as a “game” site just because you can go to the game section and play a game. You can ask to unblock the site, but then it would be the school’s choice to unblock the site or not.