i meant to say [both]

You could try putting the camera in the character object. This made it work for me

@DarkStar_Studios ok i will try that

Cool. Tell me how it works when you are done. Also, you should change the title of this topic because people other then grazer can help you. He is probably very busy

I figured it out. You have the shadow object in UI.

wdym explain what i have to do to fix this

Your shadow object has to be in the game world layer, not the user interface layer 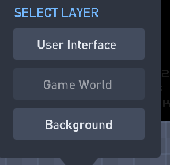 If you do this, the camera in the actual character object will work just fine for your purposes.

Since you have a larger world with a camera behavior, you could do two things:

grazer’s example was in a small space with no camera object. Yours will have a camera because of the larger map.

Doesn’t matter anymore, because you made the object in the game world.

But remember to make the shading object follow the player.

If you make the camera object its own object, you have more freedom to manuever it and do cool stuff with it.

If you make the camera in the character object, then it gives the game a slightly more jarring feel that is maybe more appropriate for a horror game.