I was working on my game yesterday when suddenly, for some odd reason, my game began to glitch out. For some reason, my character’s jump wouldn’t work. It’ll work but only for a little while. This is one of the many glitches that happened since last night. The thing that confused me the most was that I never touched the character’s behaviors. I tried checking on different devices to make sure, but they all had the same result. 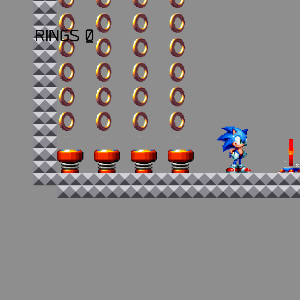 Use the left and right arrow keys to move Use Z to Boost. However, you will run out. Collect rings to refill. Space Bar to Jump Press down and Space Bar to perform a Spindash. Let go of the Space Bar to release the Spindash, giving you a boost...

okay, thank you! Also, I’ll add wasd soon. That’s also what I’m trying to fix too. I never had the jump so high that it can touch that, so it’s weird to me that it’s happening now. It’s an easy fix, it’s just odd that these problems are suddenly here.