How do I make a platform

I tried to do this before when I just started but couldn’t figure it out so I thought I would try again. How do I make a platform that you can jump through the bottom, but stand on the top? I know ray casting could work to make it non solid when the player is underneath and solid if they are above, but what if it’s a two player thing (player 1 being arrow keys, and player 2 being wasd)? How would that work with someone being on top of the platform and someone being bellow? Another thing that might work is changing the jumping to be more pixels so the player goes through the block when they are below, but idk. Any more ideas? 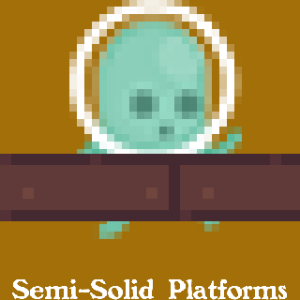 Use WASD Testing to make a platform that can be walked on and can be dropped from by pressing down. Purple platforms uses position, Blue uses Raycasting.

Also, it’s just a general rule of thumb to look in the example list before asking for help on the forums

The only problem for that semi-solid platform is that I don’t think it works for multiple players. I did a quick test and if there are two of the aliens, one on a platform and one not, then the one on the bottom can’t jump onto the platform above it. Also because it is using enable it turns off the platform being solid meaning that if another player was on the platform as well, if one fell down the other would be forced to fall as well.

Give me a link to the game, show me the code via screenshot, and I can probably fix it

Haven’t made it yet, it’s just an idea in my head. I can fix it myself with time, just didn’t know if someone else did something similar to it already.