How to round decimals

For whatever reason my number ends up gaining a random 0.0000001 and it makes the UI look horrible, any way to round to the nearest tenth (0.1) ?

I can’t deal with this right now, the positive works, but when it adds a negative, it goes to zero but keeps the old save. None of that made sense, but i’m about to implode. 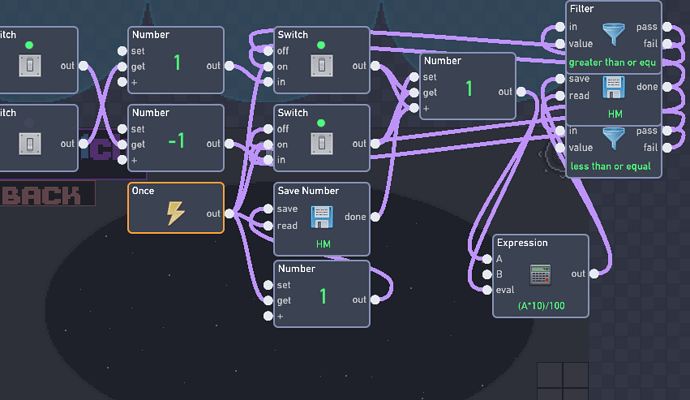 Computers use stuff to do math as quickly as possible, resulting in stuff like this. Do what I said: Math.round(A*10)/10

That’s what I have… Except I used /100 because I wanted one decimal point.

Where’s the Math.round? Adding /100 will ruin it as well.

PUT EXACTLY WHAT I TYPE IN THE EXPRESSION…
Math.round(A*10)/10

How do you think people do exponential stuff? Math.pow. They are functions.

Still doesn’t tell me why it randomly adds a whole 1, it shows up nowhere in the code, yet happens everytime.
If I scale it up then every down press will subtract 1.1, works the other way too.
And then sometimes it’ll just stop allowing me to change the number, when it’s not even at the limit.

alright so, any way to fix it?

How many times do I have to say this.

PUT EXACTLY WHAT I TYPE IN THE EXPRESSION…
Math.round(A*10)/10