Can I get an example of a kill counter, Mines bugging out, and I want a good example. Every time it gets a kill the signal sends for about 2-4.

I don’t have an example ready but wouldn’t you just have to have an enemy send a message to an object everytime it dies? Then the object would add 1 to a number when it receives the message?

What I’m currently thinking is this:

So basically, each time an enemy object is destroyed, it added 2-4 (whichever you choose) to the counter. Make sure to have this counter NOT in the destroyable object, preferably the player object. 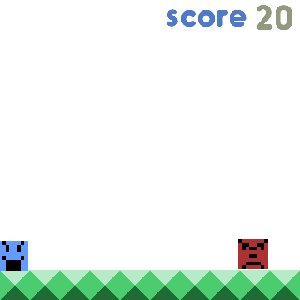 Here’s a quick example I made:)

The game- https://flowlab.io/game/play/1557789
The Object “pathfinding enemy” sends a signal when killed to “Kill Counter” that then sends a signal to “1-1” or when I make more, the other corresponding object.
When “1-1” receives the kill message it adds more than one. I’m not sure why this happens

I’m looking at it right now. I have a few questions though.

Anyways, what I’ve found is that the “Drop Chance” is actually adding numbers to the total (I tested it out by connecting the output with a number, and it came out as 70). This may also be the number being added to the total. So attaching the message to something other than this might help. Perhaps after the destroyer.

I put it on the destroyer and it’s adding 4 now. Also the reason it goes to the kill counter first is because every level will have a 1-1 and it’s cleaner and simpler to just do it this way.

So everything’s working all good now?

No it’s adding 4 instead of 1. Is there a way to filter it all down to one?

Your flowlab is indeed glitched, kill counters are simple, so idk

have you seen it though, it’s so random, but I’m thinking if I can filter it, then it would only add one.

Try maybe when the enemy destroys, it sends a message to the object with the counter behaviors and then when the block has it in its mailbox, add with the “number” block if it’s not what you are doing.

Wait do you plan making a save with it?

no, but I could. I just want to find out what’s causing it to resend.

Okay, so I’m trying to figure this out. I’m assuming somehow the number is still going through the “destroy” object, so we’ll have to think of a work-around.

I’m thinking that we should actually connect the “Dead” message should be connected to the “Damage” bundle output instead of the drops.

So do it like I said and if its not working, your flowlab is dead…or simply having a problem

I’ve narrowed it down. It always adds two now, And I have a feeling it’s because of the number blocks I’ve added but they’re all zero except the last, so it doesn’t make much sense.

Never mind, I’m just gonna leave it at 2, because it’s an even amount, and I won’t have to deal with anything random.

I have to say, better than nothing XD