Making a boss similar to The Moon Lord

Okay, So if you play Terraria, you know the endgame boss is the Moon Lord. The main antagonist of Terraria. His movment is simple. His body moves like a rag doll with joints, where he shoots eye blasts from his hands and head. Well I was wondering if boss mechanics like the moon lord were able to be recreated in flowlab. I made a mock up of him bellow in the level called “Moon Lord”. when you press left or right, he infinitley (To my annoyance) to the left or the right. He also shoots fire balls from his hands.I want him to move with the player so maybe some flowlabers can help bellow. Any suggestions? This is just a concept, so the art is bad by the way. Not gonna spend 100 years on a test level. Usuall shout outs to @“JR 01” @Superstargames @TinkerSmith @meburningslime .

Use the normal top-down movement for enemies and then use attachers for the arms and make him a block with solidity off and collisions on. If you want a more detailed explanation or screenshots message me 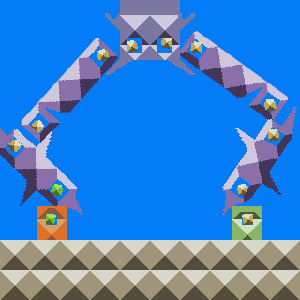 I know nothing about Terraria, so I might not be much of help.

Although that joint boss example could help you out. ^^^

@glithctyrus That is not how it works… You can’t just remove the slide effect, so not so simple. The Moon Lord boss is looking good so far,but I still have a few problems. So when you defeat the Hands and head of the moon lord it reveals the crystal heart of the Moon Lord copy. Then when you do that it should take you to the level called Water. But, my problems:

I probably missed out a few things but please take a look and see so I can have this example done to use for future references. Shout outs to @meburningslime @TinkerSmith @Superstargames and @“JR 01”

I finished just put this in each body part:

Hiya @“The Kodex”
At work now away from PC, so I can’t really do a lot (not on my phone)>
I noticed that in the Boss body ‘Run & Jump’ block, the the ‘in’ input of the MOTION block is not triggered … then for sure nothing will move.

i made it move left and right which was pretty simple

P.S. @“The Kodex”
Maybe note for this game, but as a future inspiration, try this in the body part:

Gives some fun results, depending on the ease function you use (Elastic is fun). For sure you could extract the player X position and use that one as target.
Along the lines: “X min” = player X-100, “X max” = player X+100

@TinkerSmith I think that was the problem for sure, as nothing did happen when it should have been.

@glithctyrus The code you have above does not work and never will because of the state of my Moon Lord Copy. That code would work for solid, movable and gravity affected objects, but my MLC does not meet the whole criteria. And having that for all my body parts would not be a good idea as they all lead to the body so they are not independent.