You could just call it Sanctuary

Isn’t Sanctuary a show? Also, I don’t know why, but Sanctuary sounds like a horror game waiting to happen.

Sanctuary Simulator sounds too-much like some kind of meme game, I’d change it to something more along the lines of “Solitary Sanctuary” (Hopefully something better though, I came up with that in like 30 seconds lol)

It does sounds like a meme, I probably will change it. Thanks for the suggestion

After a very long time, finally some progress

I have a very, VERY basic framework for the food system so that’s fun. 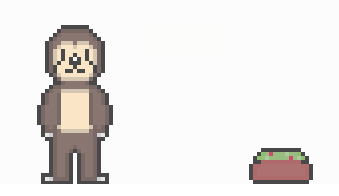 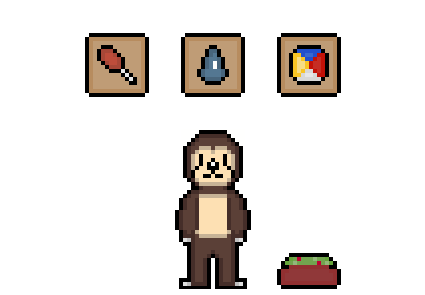 P.S. I just realized that these pictures are garbage for explaining how the system works so I’ll explain now. Click the food button, which pauses the game, then click the food bowl and the sloth will be teleported to the food bowl. No animations because I am tired.

What? So only once a game?

It should only trigger once… Double-check that your gane isn’t sending it multiple messages or for a sustained period of time.

You could add a switch to the message that turns itself off, and after a certain amount of time it turns the switch back on.

I have tried that. Once it gets a message, even if the switch offs, it continues to do the action.

This game is going on hiatus for a while because my brain melts everytime I see the behaviors, thanks I guess