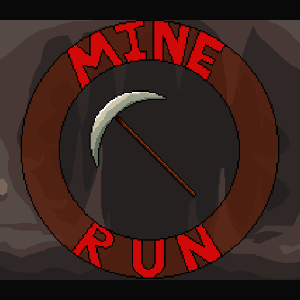 ___ #MineRun Sprint through the mines, collect coins, and compete with others in this brand new infinite runner game! ___ ##Credits Visuals, Music, and Functionality provided to you by [DarStar...

This is my submission to the flowjam. I’m really happy with how MineRun turned out, even if the game type was common this time around. I hope you all enjoy it as much as I do!

Also, feel free to comment on future additions you want to see in MineRun!

I like this game, I would suggest having the character start farther to the right.

Thanks! By the way, what’s your favorite skin?

I like the Noir, but I think you spelt it wrong.

That’s embarrassing. Should be fixed now, though.

It’s pretty fun but I’d suggest making the double jump jump higher, right now it doesn’t help the player much, because it doesn’t go very high. If that makes sense.

I should make a tip about this in game, but I designed it to be more of a crash-course correction boost (mainly because it was super overpowered when I raised it more than I had it).

Woooo, got 2nd place on the leader board

Good job! I’m glad to hear it’s fun!
What would you say is your favorite skin?

Either Mushroom Miner or Living Crate, but each of the designs are pretty unique:D

Hello.
I got the feeling this flowjam that my game was lacking. I would like to fix this.
My score suggested it wasn’t creative, which I understand, but there is nothing I can do to fix that, at this point. It also said it wasn’t very fun. I would like to understand why, so that I’m not taking shots in the dark on my next update. Could anyone shed some light on this? Is more content necessary or more variety? Any support is appreciated. Thanks!

Let me preface this by saying that I think you are a very talented game designer, almost certainly better than me in terms of skill, and you should not give up on making games. I hate to see people who have real skill getting discouraged because not everyone liked their game.

I don’t remember exactly what score I gave your game… in terms of following the theme, you nailed it.

Art and sound? Most of the art looked custom, though it looked like you borrowed a bit from the the default collection. I didn’t really care for the music (no offense).

The “infinite running and jumping” platformer thing was really overused in the jam. Yours didn’t have much that really set it apart from your direct competitors.

I don’t say any of that as an insult at all. I know you are capable of making great games. But when you have 32 submissions and like 12 of them are infinite runners… you really need to add some “special sauce” to make yours unique.

Yeah for the theme I got like a 3.3/5. Which the theme was Tap or Swipe so I assumed you had a choice between the two, but I guess the reviewers were looking for more swiping since it’s kind of a newer mechanic for flowlab mobile controls. I also did an infinite running game which is probably why my game got such a low creativity score. I guess I’m surprised my game got such a super low score considering I thought it was one of the better games I made.
Then again I can see where an infinite running game would be made popular for the flowjam since the theme(s) literally pushed that idea being super easy to fit under, but it’s just another running game where the creativity wouldn’t be all there so I understand my score there.
But I guess the theme had to be very strict I guess which I didn’t understand that part at all since I had mainly tapping in my game and swiping for the shop, plus using two sub themes for the overall idea.
Anyway I’m not really gonna complain, I’ll just learn from these mistakes and maybe try to make a more original game for the next flowjam. Hopefully be able to score as good as I did with Flee.

Hello! I will be releasing an update for MineRun, soon. I realize that my game has very little ‘special sauce’, so I need a little assistance from you fellow Flowlabbers. What would you like next in Minerun?

Features I will add include:
Character motivation/ semi story

It seems like everyone who voted wanted power ups and more obstacles. That’s awesome!
I’ll leave the power ups as a surprise, but I am open to obstacle ideas. I will be picky on what I accept for the game, but most likely, I will end up helping refine your idea instead of rejecting it.