My game other games won't load for me

When I load in my game in the editor, it works. But when I try to play it (mainly the 2nd level) it won’t load the level. So when I exit to the editor, it goes back but to a frozen screenshot of the game. After that I can’t access anything. This happens to some of the games I play on flowlab too, but not all of them. I tried testing it on two other devices and it still happens. I have no clue what’s going on, and it hard to explain it.

I’m getting this issue too

I think it’s because the second level so so large. Try adding the background as a parallax and removing the other parts

I tried that and it’s still doing the same thing

Have you ever tried viewing the console log when a game refuses to load, or when it crashes?

If you press CTRL + SHIFT + I, it brings up a side bar, one of them being the console log. It usually displays an error when there is a crash.

I would try to help you, but unfortunately I am quite busy right now, so I can’t do it yet. 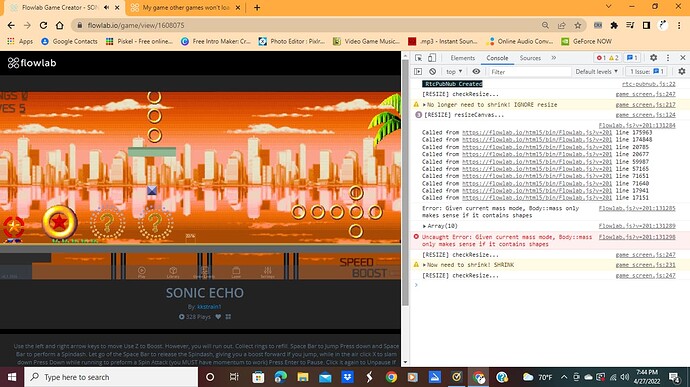 I got this but I’m not sure what it means

I’m not quite sure either, but the “body mass” thing might be the reason the game crashes. Like CodeAlpaca said earlier, it might be due to the size of the level (there is only so much that the website can handle), the amount of objects in the level, or the collision shape of some of the objects.

Are there any objects with the polygon collision shape, by any chance?

the only objects that are polygons are the Left Hill (Hill L) and Right hill (Hill R). There’s 19 in total in the level