Hey @grazer - It would be cool if there was a system where you could give Ownership of a game to a user in flowlab.

For example, you could type an username of a user in the bar in the My games page and when you click send. You could give Ownership of that game to that user. This could be used to make games for people and maybe make money through PayPal.

And that money could be used to buy indie. This feature should be available to free users so they could make money and buy an indie or education or studio pass.

Also, it would be cool if there was a feature where you could make an ad for your game and publish it through the platform. So the more you pay the more people would see. Like paying 50 dollars and 500 people would see the ad. And the money would go to grazer so flowlab could improve. For example, look at Roblox when I open Roblox I see ads on the right and left of my screen.

WHAT he SAID!!! post must be at least 20 characters

Sure no ads. But what do you think about the Ownership. Like giving Ownership of a game to a user.

Though from moving a project from an old account to an indie account is still possible if you ask ask nicely to Grazer.

Though you can make ad for your exported games for money, maybe you can even promote yourself lol.

@JR01, What you said is true. About ownership of a game. But the ads won’t be put on the games but would be shown on the main page of flowlab. Just like Roblox on the right of the page, you see ads made by users. 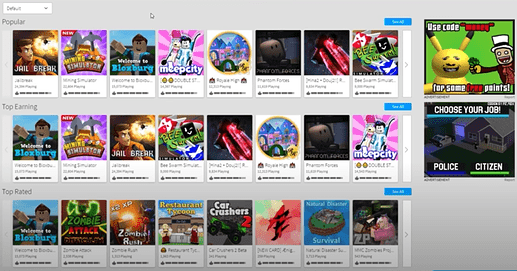 I Think Thats A Cool Idea Though

Wait… Cant You Make A Group?

That would be entirely up to Grazer, and could fall under clickbait. But as I said before, Grazer has tried to keep Flowlab clean as possible from the start.

Though a search option for like most played, most liked, newest games, etc. could be nice.

Plus adding this ad feature could make more money for @grazer so grazer could improve flowlab.

Hey @R0CK, these are some interesting ideas. I have thought before that it would be nice to have a way to cross-promote each others games on mobile. Kind of like AdMob ads, but just for users, so that when you participate your game would display ads for other Flowlab games, and those games would display an ad for yours. I’m not really sure it would be worth the effort to build all that at this point, but I think some way to promote each other’s games might be a good idea.

@JR01 is correct that I have always resisted the idea of ads on the site because I dislike ads in general. Ads that promote Flowlab games would not be terrible though, so it might be possible to come up with a reasonable system for that?