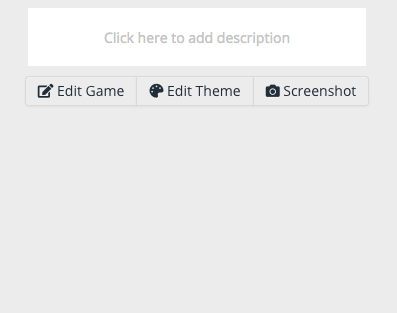 Under the edit button maybe there should be a recommended tab.

I don’t really like this idea instead how about @grazer could add a advertisement system were you pay 5 dollars or so to advertise your game on the site for a week. There will be about maybe 10 games advertised each week every were on the site one might pop up in a advertised stop or something that why @grazer gets money and you get very good advertisement

@GrimProductionZ, I like the idea of yours like paying money for a week on flowlab.io games site so grazer could make more money for features.

Yeah, the idea of advertisement of games would be a pretty cool idea, but most people advertise their game on the forum so it would sometimes wouldn’t be a very great way of achieving money, but I did have an idea in which the system had a currency in game similar to that of roblox, but you can pay money for credits and use credits to either buy pixel sprites, maybe even advance tutorials, and of course different indie plans. Although this is just an idea and probably isn’t the best way since someone will find a way to hack the system, even though its not a very great system, its just an idea that I think would be cool. You could even add like daily log in rewards for people who get on daily so people will want to stay with flowlab longer. I noticed that a lot of new users tend to leave since they aren’t really apt to learn about flowlab and make games, but with the advertisement feature (maybe even a game of the day feature) they are able to see what others have made and be motivated to make a game better or just as good.

This ar just ideas that arn’t much of a necessity and might not be much of a money maker, but It could help increase the amount of users that use flowlab. I only know of like 30 or 40 people total that have stuck around for years here, that number is a bit low.

There are a few bad things I can see of this, flowlab would eventual sway into a more pay-win sort of thing (If governed by the wrong people, not blaming any current mods or grazer), plus a lot of people could possibly abuse this system, so I probably wouldn’t think of it as much as a great idea, mainly just a future concept maybe.

As of now, you can only sponsor your games on other people’s websites maybe as an advertisement, or post the game on the forums in hopes that other people see it and play it, but it has already been established that advertisements in the website in general will not be a thing. Ads will only appear in your games. So I would say that I support a “Recommended Games” list that changes every now and then, at random. This will help show newer games much easier, or remind people of games that they have already checked out before, but had undergone a massive update.