After playing a Undertale and @leonknighte 's Luca’s Tale,
I wanted to figure out how to reflect my character across different surfaces, like a mirror and water reflections.
After tinkering around and getting down how the UnderTale movement works, I have both a mirror and a water reflection.

With the water reflection, you can’t really use the reflection behavior because using 2 behaviors (for the X and Y) and imputing back on just one of them will stop all reflections. In this example, I actually hand sprite the character upside down so I could just use the X reflect. I actually think using NO reflection behaviors with the controls would be best and to just animate Left and Right individually because of the work around to activate the back input is not perfect.

Reflection behavior is better used as to how the player/reflections looks rather than being tied to the movement or spriting upside down. 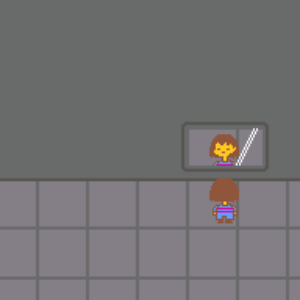 Use Arrow Keys! This example shows how to make a reflection from reflective objects, like a mirror or water!

Even though it’s cranky if you spam the direction keys, it’s a pretty cool concept.
Works fine if the character doesn’t have too many animations.

It’s the work around using the flip behavior @PixelPizza.
If I prioritized the animations and made it for all direction with no use of the flip,
I think I could make a more consistent character and mirrors.

I’ll eventually remake the example later so it’s clean and better to figure out
(to where no flip in the movement bundle).

One glitch with the effect, If you press mulitible arrows at once it breaks down and the reflection will be facing a different direction