This will be very useful to everyone. Be sure to look at this example.

If you are tired of using clicking for your menu, and want to toggle through it with the arrow keys like a console or handheld game, then this is for all of you.
Press up or down to scroll through the 4 buttons.
Press enter or spacebar to select them

I’ve spent the last few hours making different concepts of how this could be done, and after deleting several versions, I have decided that this is by far the most practical and most simple way to make a menu screen. Using this concept will make your games look clean and more professional if used on PC or Console, but doesn’t do anything on smartphones. Smartphone apps can stick to using clicking, because of the touch screen.

I could make the buttons smaller, I could make buttons on the left and right side, and I could make a menu with a bunch of buttons on the left and a couple on the right. The concept uses a bead set to 0 alpha, and has up to add 1 to a number, and down to add -1 to the number, filtering -4 and 1 to set the position to the top or bottom using position grid. Proximity to the invisible bead triggers an animation and alpha to the button it is touching. Hitting enter or spacebar while the animation is active triggers a click. The proximity is set to repeat 0.0, while the timer is set to repeat 0.1, so the proximity will always be faster, allowing uninterrupted animation.

I hope many of you find this useful. I will very likely be getting back into flowlab on Thursday, so expect to see a lot more new and advanced concepts come out as I work on my game. Here’s the link to the menu concept: 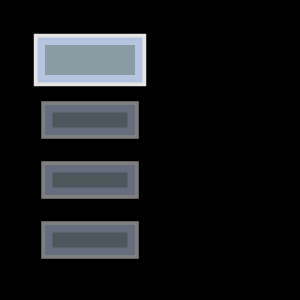 Update: Added action box.
All 4 buttons are the same object, so why do they do different things?
Well, the bead that selects them has a move set that ranges from 0 to -3.
These numbers are mailed to the action box, and filtered.
Hitting space or enter to whatever mailed number is set, changes the animation.
You could always use different objects, but I would personally like to save objects to prevent having over 20 buttons in a menu.
You could also have each button once their x/y position, and have them play an animation filtered on that specific filtered x/y coordinate. This would allow tons of buttons of the same object to do completely different things.
Another cool trick would be to have an advanced menu.
Let’s say the top button is play, it sends you to level 1.
Box 2 is whatever
Box 3 doesn’t matter
Box 4 is Options. Now how are you going to load a new menu? A new level for options? No.
You can have clicking that button toggle a number. If the number is 1, it’s main menu mode. If the button is number 2, it’s options menu mode. Since all the buttons are the same object, they will all change to options mode, which you can set a different animation per x/y AND if the number is 1 or 2.
Using multiple filters to make an advanced menu will let you get the most out of only having to make 1 menu button. This way, you don’t have to have tons of button objects taking up space in your game world or GUI objects folder.

@CrimsonBlackGames
Thanks. The good news is that I’ll be getting a laptop in the mail soon from amazon. This means I will be able to help you guys and grazer out a lot more.

However, I’m going to discard this menu for the Sonic Advance/Riders/Adventure style advanced menu. You’ll see that it is very complicated and well polished. I should be done with it within a week.

For some reason I missed this when you posted it - very nice example, thanks!

I was originally trying to figure out how to prevent moving above or below the screen, but when mashing up and down, it somehow messes up the counter, allowing you to go past the screen. That made me decide to go with a failsafe and do a position loop and set to 0, so even if you somehow get the button past the menu screen, it resets to the top or bottom after enough key presses. This was the best solution. I’m currently jotting down notes for making an advanced scrolling menu, with dials and sliders, like music and sound volume sliders, as well as difficulty options, where setting hard mode sends a message to an object that stays on all levels, and doubles enemy health once per level.