Made this in maybe 40 minutes, just a rough idea to show abstract things you can do in flowlab.
Thanks to @“JR 01” for chatting all night and giving me ideas. 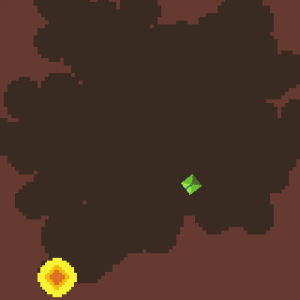 No problem, I got my own version of the engine out of it.
I plan on making a few games out of this myself.

@“JR 01” Looking forward to seeing what ideas you come up with!

This is a really cool idea - I wouldn’t have thought this would work at all with so many objects, but it runs great for me

@grazer
Trust me, any more objects than that, and it doesn’t work, lol. I did a lot of tests, and had to go with 4x4 blocks, instead of 2x2 and 1px blocks. As it is now, it runs, but it takes a long time to open the editor, and it’s a bit slow until you blow up a lot of ground. Eventually it plays much faster. I pushed flowlab to as far as it could go without crashing, and still be playable.

I tried it, its really cool!

@“Johnny boy” Thanks! If flowlab was a bit stronger, I would add multiplayer, but I’m afraid it’s too laggy, even grazer is surprised it works. After Html mode is finished and bug free, flash will be gone, and multiplayer will be ported to html, so I may as well wait til then, for the faster engine.

quick question, @“Mhx Ar”, why do you have a loading screen (these games take that long to load), and how? and who? and what? and where?

@“Lyndon Bork”
Unlike most users, if I have a loading screen, it’s usually actually real. A lot of people make fake loading screens just because they like loading screens. When I do it, like in Snakehole, it’s real. Those lines moving are actually building the level. I’m using a block command to have a level generator, which is laggy and slow. Usually when I have a game that takes a while, I’ll make the UI screen black to hide it, and just have the words “loading” or an animation. Once the level is finished being built, it spawns the player in, so you can’t play before the level is done.

Most people build their levels themselves. When they change levels, flowlab does all the loading. I have a few games where a bot builds the level, so I have to manually do the loading.