Let’s say I want the sprite to have an attached object that moves independently of the character. The game automatically places that object in the center of my sprite. Is there a way to move the object to a different position?

For reference: I’m making a “war” type game with tanks and planes and stuff, and I want them to have moveable turrets, but I want the turrets to be on different areas of the vehicle. See below: 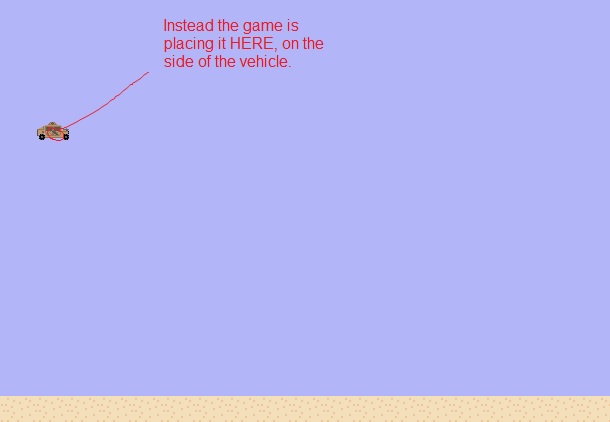 Is there a way to reposition an attached object on a sprite, or do I just have to work around that when designing my sprites (i.e., in this case, pretend that it’s a side mounted cannon instead of top mounted?)

You can offset the attached objects by using an Always.

Really? Hmm… is that better than attaching the sprite to the object (I was originally trying to attach the object to the sprite)? Or does it not matter either way?

If you attach the car to the gun, you cant drive with the car because then the car would not have a hitbox.

The car is drivable somehow…? Haven’t tested the hitbox for the car itself yet though…

EDIT: Ah yes, the gun is the only hitbox. Hmm…

Also, I need a way to stop the gun from rotating randomly after it collides with the solid sky block…

NOTE: game may not function when someone else tests it, as I’m going into edit mode…