i know, when will the updates end? probably when ideas stop going through my head while im at work.

i think thats it for now, let me know what you guys think 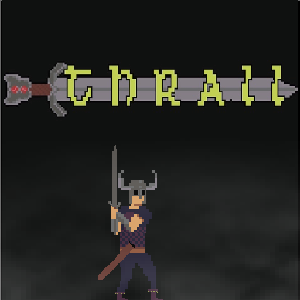 play as the brave & mighty Thrall on his mysterious adventure through dangerous lands * currently adding more to story line and new scenery coming soon as well as new enemies* * x to attack * SPACE to block * extra health & special moves can be...

Cool. However, still one question remains:

HOW TO KILL BEAR

slice him up until he dies ! ive slowed down his attacks and nerfed his attack damage so it should be easier yet still slightly challenging. dont forget to block his attacks , i forgot to mention when blocking comes into contact with an enemy attack there will be a " block " text to ensure you that not damage was taken to the player

I’m really enjoying this game, congrats on 2,000 plays by the way!

i just made a screen recording but i guess its too long to send, email me and i can maybe send you the bear fight

im really glad you enjoyed it , im working on a new enemy its large scale and im having trouble making a walk animation for it so, theres something to look forward to lmao

I feel you, I didn’t realize how satisfying the sound design of this game is until now. Great job!

i think the sounds suit it perfectly, still trying to find a better bear sound and might add foot steps but i dont want them getting annoying

I wasn’t able to make it to the bear because a lack of time, but I’m exited to see it. Sounds like a good challenge. I’m also intrigued by the story, is there something mystical going on (such as trolls/orcs), or is it just my imagination…we may never know

youll jusn have to find out

Indeed I will. One thing I noticed was that the vulture sound can get a little repetitive when there are more than one, you may want to add one or two more (and make the different sounds random) in order to avoid this. If not its not a huge deal, but I just thought I’d address it.

I’m also loving the way you use dialog, its kinda like how I’m doing it in D.O.M. The difference is in your game the text fades, and shows different character talking (not just your own), in D.O.M I have a text box specifically dedicated to Sam (The character you play as). What I mean by this is that when you look at the bottom of the screen it always has text that says “Sam:” so whenever he has something to say it’ll pop up down there, and you can also ask him for insight on the situation. I thought I’d share so maybe you can get some ideas, and because I thought we were going about it in a slightly similar way.

That’s it, I just wanted to call out that there is a new featured game: Great work so far @probablydon