It Looks Cool, But When You Get Killed By The Spikes It Makes You Lose The Motivation To Keep Going. Maybe Add A Indecator To Where The Spikes Are?

Like what @Drsqueenbenicheen said, you could make it so you drop a headstone like in terraria or something else upon death and those could be markers for where the spike traps are, since the ground isn’t grid-like its hard to tell where exactly the spikes are. Now if the ground have an outline so you can see each block separately then it would be much easier. But I feel a marker of some sort or indicator would be pretty useful. Then you would have to increase the level size to make it even more challenging and it would be a guess and check style game. At least this is what I think.

So due to the large size of the levels, it makes it quite difficult to tell where the traps are, to the point of it being near impossible. Decreasing the level size, or adding additional indicators that there is a trap (not obvious indicators, though) would make gameplay even more enjoyable. But other than that, keep up the good work!

I will think about it. But thank for playing my game!

Thank! Your idea is very helpful. I will fix it!

Yeah you right, when i test the game it very hard to win. But in next update i will make it easier

Thank for playing my game!

#off-topic but do you have a YT?

Bye, i need to study now…

Just make a separate sprite that looks like a skull, gravestone or something, then make it so that when the player dies it will emit a stone, but instead of the player dying and restarting the entire level over, just make him teleport back to spawn so its less laggy and much more smooth.

Okay so here is a screenshot that i took. 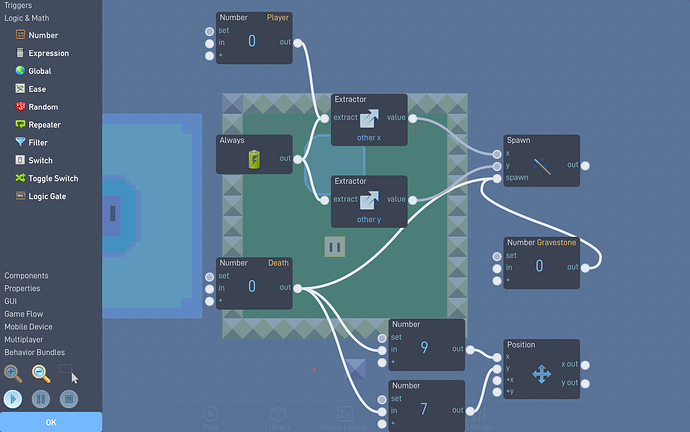 image2160×1355 728 KB
Okay so the number behaviors with words in them are just bookmarks, they can be removed.
The death number is when the player collides with the spike it will then trigger two numbers (9,7) which should teleport the player back to spawn without resetting the level. And the death should go into spawn (needs to spawn gravestone).
Make sure the extractor is linked to the player so it knows where to spawn the gravestone. I hope this helps.
1 Like
wibu_s_game December 19, 2020, 3:13am #19

Thank you so much!!!