Something I just spent the last 6 hours on, and I don’t know why.
Either way, it basically randomly spawns new asteroids, and hitting endgates teleports you to the opposite end.
Click the screen to toggle between static movement, and asteroids traditional movement. (S) fires charged rapid fire.
The vortex in the middle sucks you in. There is no scoreboard, and you cannot die.
-This was just a demo test that accidentally turned into a game.-
http://flowlab.io/game/play/490587?v=2 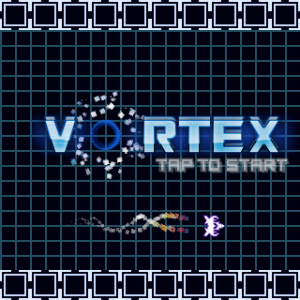 I love the engine trail, it looks fantastic!

Thanks, I thought so too. I might use the same gimmick for something else in the future, because when you rotate in a circle, the trail give off a really cool particle effect, that I might use for a jump gate or something.

Pretty nice graphics and gameplay update. Try it out.

Added a menu, and a lot of cool new stuff. I changed around the asteroid and vortex spawn system,
and I’m now working on new types of enemies.

*Added lots of particle and flash effects for both the asteroids and vortex.
*Added smaller asteroids. May add even smaller ones, later.
*Added a flexing fractal grid. It reacts to your movement and weapons.
*Removed base controls and forced ship controls, for a better game experience.
*Removed the charge before rapidfire. Will be adding new powerups in the future.

hehe… ever heard of geometry wars?

I had both 1 and 2, very good games. Even had the homebrew for PSP. GW3 looks weird, though.

Ik. I have the 3rd for PC steam. Speaking of which i sent a friend request for that. Says you havent been on for quite a while

Steam? Oh, yeah, I made an account in like 2012, and the only game I downloaded was Axiom Verge. I never use steam. I actually hardly ever even play video games. I prefer making them.

agreed, i subbed ur YT and also watched you on DA

Oh cool, thanks, but I don’t really use any of those much anymore, either. I was actually planning on wiping my YouTube channel, and filling it with trailers for games I complete, music, and animations. I used to just be a game glitcher, because I love finding bugs. I’ve beta tested dozens of games, just to find glitches. As for DeviantArt, I kinda use it, but only if I do new drawings or animations. I also have a soundcloud, since I need a place to store my music, but it’s time consuming to make games, drawings, digital art, music, and animations, when there are only a few hours of the day that I have free time. That’s why I hardly get any sleep, and I’ll be up til 8am.

Then theres… Pushing crap with the camera. I never noticed that in sonic adventure!! It was hysterical

Oh yeah, I found that by accident. I wonder who forgot to make the camera not solid.

READ BELOW FOR UPDATE INFORMATION

Back to the game:
Right now, it is just an Asteroids-esqe game, but I will be adding 3 game modes.

*Arcade Mode
Shoot and survive infinitely spawning enemies. There will be a total of 5-10 enemy classes, and possibly super and ultra variations of those enemies, with a very rare chance to spawn. There will be powerups based on score and multiplier. You can earn extra lives and breaker shields, which make you temporarily invincible, and explode on secondary button press. The shield explosion is bigger the less damage you take. If used immediately, it will wipe all enemies on the screen (Since grazer has everything off screen auto disable, I can’t destroy off screen objects.) Your final score will be displayed on the score board.

*This mode may get a few 2 player modes, like Cooperative, Competitive, and Tether.
Tether mode will have a beam of light between the two players, and they are rubber banded together, but the rubber band destroys enemies.

*Challenge Mode
This mode will be similar to Arcade Mode, but with an enemy counter, that triggers the next wave of enemies. Each chunk of waves will spawn new and stronger enemies. You will also have a random chance of spawning a boss stage, after each stage. The power ups in this mode are pickup based, and enemies will have a chance to spawn strong and unique powers, which can be chained with the use of the secondary button, being collected for energy, and used at certain energy levels, to have stronger versions of that attack. Some powerups will synergize with other powers, others will replace them. There are no shield bombs in this mode. Some bosses will be intense, and have a chance of spawning as super and ultra bosses, after Level 10.

*Hyper Arcade Mode Edition Remix
This will be the coolest mode you will ever play. Let’s just say, there is no game in the world like it. This will be a late DLC type update, a complete overhaul of the game, with its own crazy game mode, full of difficult and unexpected challenges.

As for now, I plan on making some adjustments to how and where enemies can spawn, for example, they will never spawn on flexing grid space, so they are far less likely to spawn right on top of you, or where you are shooting, making you far less likely to die from a spawn kill. Enemies will also flash and buffer when they spawn, before moving, so to further lessen your chance of hitting them.

Tether mode reminds me of symbiosis from pewpew 2. Still cool that your doing that tho

Pewpew sounds familiar, I may have played it before. I had the tether mode idea from the Knuckles Chaotix alpha test project, where Sonic and Tails are banded together by chained rings, and bounce towards each other if too far apart. I thought the use of them in a shooter game with the kill effect was unique, but with 7 billion people in the world, and games being around for over 30 years, I wouldn’t be surprised if someone has done something before.

You dont know how many people mistook crystal for raven from teen titans, so i feel you on that on that one

Oh, I thought the same thing. I thought she looked like a mix of Raven and the characters from the game Journey.