[spoiler]Normally I would be at work now all night, but I blew a flat tire, and was sent home, because every repair shop is closed. I don’t know what to think of this, because I’ve had to buy 8 tires this year. I hate this town. At least I don’t have to work tomorrow. Anyway, I seem to be consistent at making holiday games. I did Pong DDR Skeletons for Halloween, and Turk Hunt for Thanksgiving. I didn’t plan on making a Christmas game, but I guess I have a few hours tonight now. Not sure what I want to make. I will post an update when I have decided.

Santa needs to deliver gifts to all the houses, but what a bad night for aliens to invade the Earth, for them!
The elves built him a jet sleigh, and now he and Rudolph must save the world.
Use S to blast Rudolph’s laser beam and D to drop gifts down to the houses below. The gifts will also destroy alien Tripods.

Non-profit fan game made for the holiday.
1982 NAMCO LTD. 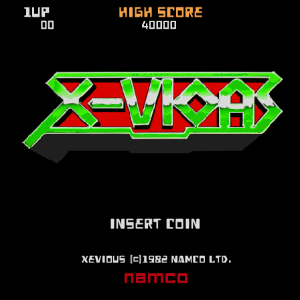 BReakout except the bricks are presents

The boarders can be candy-cane, and the paddle could be chocolate.
The gal could be a jaw-breaker.

A game where you have to find an open repair shop for tires. And you become a Mhx Ar when bought 8 tires.

That is cruel XD

Updated the top, also damn, you got me Latif.
I’ll update it again with the link when I have more than just the title screen.

I was going to work on a random level generator, that emits trees, grass, snow, and sand over top of water, with randomly placed houses and enemies, but unfortunately, objects seem to argue far too much over which gets to be on top, so there’s no way I’m putting in the effort for an infinite scrolling random level generator if the objects are going to flicker like this. http://flowlab.io/game/play/783462

It was fun on namco museum for DS

Also, pac-man vs for DS

@CrimsonBlackGames I’m glad someone else enjoys namco games. I decided to give up and manually draw the background. I did a pixel snow sort of thing. It will look better when I add GUI snowfall and enemies. Tell me what you think so far.

Drop gifts onto the houses for 300 points. Killing a disc is only 30 points, so those presents equal 10 discs. Which is your priority? (Houses alpha for now to show you hit them)
I’ll add tripods and other enemies sometime today. Idk when. Hopefully some of you like this game so far.

Just added highscores. As the game is right now, my highscore is 6420.

Impressive work once again - especially in such a quick timeframe!

Thanks! I only spent maybe 6 hours on it, since most of my time was goofing around playing it for fun, and watching YouTube while drawing. I’ll probably work on it for 10 more hours at most and call it a proof of concept, unless I decide to add a boss at the end. I don’t ever spend more time than necessary on a nonprofit project. If you like it when it’s done, you can feature it, to show that flowlab is great for building retro/arcade games.

I wonder if anyone noticed Santa’s hat blows in the wind. It’s a small touch, but something I thought worth adding. That, and all the objects move synced to the music. I have a thing about wanting animations to match music tempo. It’s a very unappreciated quirk.

New Super Mario Bros tried it out once. Flowers and enemies bop to the music. I’d make the whole game of Shifter a visual equalizer planet, but something like that isn’t gonna happen in flowlab.

Yes, I love that detail of New Super Mario Bros.

not bad at all!