Hey everyone! I made a new game: Astronn!
It’s an experimental Bullet Hell made in 3 days.

The game is playable from start to finish, and I have plans to add more content, but I would love to know what you think of it.
So, I’m releasing it here exclusively to gather some feedback first

Dude, this game is pretty cool, but I feel like you should slow a bit down on the bullets. The enemy shoots way too many and its hard to actually shoot or do any damage to him. Other than that, the game is very fun.

I haven’t had much time to play a lot of games, but I’m glad I played this one!

Okay, I just finally now beat it. I have to say the game is just amazing. I did find a bug though. You can still shoot even though your at the menu and the bullets and fly onto the screen while it says click anywhere to continue which can be fixed with some barriers or something. Overall very awesome game.

Thanks @ManiacPumpkin I’m glad you like it! I don’t think I will make the game easier though, the boss is supposed to shoot a lot of bullets because it’s a bullet hell

The main shooting mechanic is that you can’t move while shooting, so you need to time it right and keep dodging.

–
Also, on the bug, you can shoot on the end screen (when you beat the game), but not on the menu (game start), you sure it was on the menu? Could you send a screenshot?
If it’s on the ending screen, I don’t mind and I think it’s cool aha.

np, I didn’t get to play Die For U for very long so I’m happy I got to play this

P.s. I plan on going back, and playing Die For U and sending you my high score (even though I’m really bad at it)

Ahah thanks, looking forward to seeing your score! @Ramshacklegamestudios

Definitely not as good as JR 01’s score lol

wow, this game is really cool! i love the art style. very looking forward to you adding sound and music.

I’m really bad at this game though lol

Thank you! @F3Art ! I’m excited to update this too

Also, you will get the hang of it

Dang, you did it again @PixelPizza
You know that reaction games are normally not my thing, but
*** I LOVE THIS ***

And such a great ‘show off’ for Flowlab.
Simple mechanics & Great Idea = WOW, what a fun game

you here if I could. I think it is time @grazer gives you an award

I grant you the rank of @seamothmaster44

Ahahah thanks @TinkerSmith ! I appreciate it

I’m aiming for that featured star on Die 4 U and this one.
But I think ASTRONN should have some more stuff before it’s featured ahah. 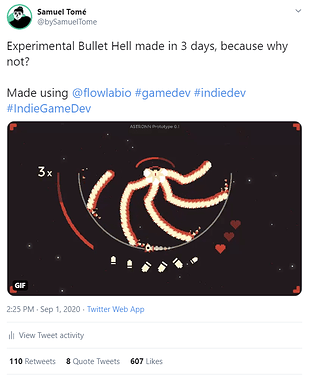 So that means I will be updating and continue to work on this game!

(That’s why the game is closed until the new update)

Also, I updated this Discussion because the images disappeared.

@PixelPizza a really cool idea is that once the game is finished, make a mobile version where you swipe your finger across the screen and the ship will rotate around the 180 degree line, but will follow you finger which only reads its movements through the X-axis. Just an idea so I can play the game on phone and play it anytime I want since it’s such a good game.

Yeah, that could work @ManiacPumpkin, or maybe a Joystick in one side of the screen and a fire button on the other side.

ASTRONN Demo v0.2 it’s here!
And it’s now open to the public for a limited time.

I finally got to play this game at it is amazing! It is rather fun to play.
I don’t remember my score, but I do remember that I passed 330.