Here, I made this in about maybe half an hour to an hour. Maybe it will help, but even I couldn’t get the rope physics right. Ignore the graphics, I made them in paint and didn’t feel like putting in too much work on them. http://flowlab.io/game/play/72671

Hey Mhx, I think this is a cool demo! Make it a game! Is he wearing a tie? Maybe Grazer should have some Flowlab merchandise made…ties, stickers, caps etc…They can be part of the competition prize if I ever get enough takers…

Yes Donkey Kong wears a red tie with DK on it. Also, I made this demo because a few people were having problems making ladders and ropes.
I’m actually pausing DA again to work on another game.
Hopefully I can get more done in this new game, because it uses less effort.

There you go, just for you I spent another half hour and made a full level. Enjoy

Yes it will be buggy, ex the crocs will fly off the ground because their behaviors get disabled off screen by grazers method to save memory and buffer. I’m not going to fix anything because it’s an example.
There is another bug like in his monkey game where you get stuck and can’t jump unless you fall down a step. This is due to a collision check error where the game engine doesn’t notice you touch the ground and turn (on) the switch to allow jumping. I can’t do anything about it, except I made it so if this does happen, pressing down will allow you to jump again.

Have you started the new game?

Nope, I’ve been spending a lot of my time making high res sprites, which is something I don’t really enjoy, since I prefer 8-bit or 16-bit spriting. Even still, it looks much better on an iPhone in 32-bit than if I made NES graphics.

Can you guess what my inspiration was for the game I’m working on?
http://www.flowlab.io/game/play/72812

I like how I gave it an optical illusion so it looks like the stars blow in different directions than just going down. 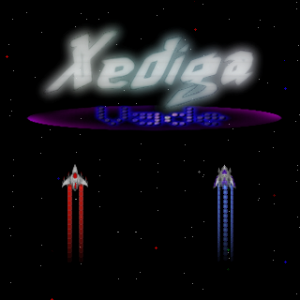 i love the trails behind the ships, IT LOOKS AMAZING!

I’ll admit I spent hours and hours on just the little I made, but I do love the trails

Grazer doesn’t have tilt, just shake. Besides, I was thinking about slim neon buttons at the bottom and a toggle stick if I can pull it off. I want there to be shoot, bomb, and special. Each ship class has different weapons.
I made a logo for it, but unfortunately, the logo lost about half it’s color and shine.
I can’t seem to get it to keep it’s color. Damn .png files, man…
Anyway, I’ll work more on the logo some other time, hopefully it looks good to you guys, because I’m going to give it a big incoming animation sequence.

Here, click the link and watch for about a minute.
http://www.flowlab.io/game/play/72812
I’m considering adding Co-op for the PC version.

Looks cool. Only thing I would say is that it’s quite difficult to read the word ‘Vade’ underneath…

What’s the background to the name of the game ‘Xediga’?

Yeah, I was thinking of lightening up the word Vade, idk why tf the image is so dark there, but the Xediga was so bright and colorless.

Love the ships, especially the trails! Also love the Donkey Kong ropes - you have dialed it in to play really nicely

Cool game. What I want to make is something like Streets of Rage 1. I beat it for the first time today. That would be fun to make.

Thanks guys, hopefully I can pull off a vertical scroller that doesn’t actually scroll. The annoying thing is I want the player to not go off screen, but I want enemies to come in from off screen… The other annoying thing is I want to have a full scrolling level, but I want to be able to move up and down, without going past the screen. Oh sure, I can pull it off somehow, but the thing is it’s freaking annoying as hell man. Say I want enemies to spawn in at some point, basically I can just have a background be continuously emitted and have enemies be emitted with timers, and never even have to move from my 10x15 box.

Streets of Rage huh? Oh yeah, hey that’s easier than Mortal Combat because you don’t need extended body parts and pixel detection… Streets of Rage is like Double Dragons, and their body parts don’t extend past their boxes.

How did you do that rope stuff on the Donkey Kong game, there isn’t any behaviors to the rope.