I want to make a game that is a platformer(very much like a fighting game) In this game will feature the Avatars of the Profiles from you guys!! The SUm of the story i am willing to give right now- THe main Character(Reality Glitch) was thrown into an arena, not sure why or how, the main antagonist (The Undying) is thrown with him, the main character assumes that he is causing this…the great reveal will shock all. The people Fighting the main character willl be your Avatars! Any one who would like to join up with me on this project make a team and invite me!( i dont have indie so making a team myself is impossiblecry) Any one on flowlab that wants his/her avatar featured let me know, I want to know what kind of avatar you want(such as this, which is The Undying- 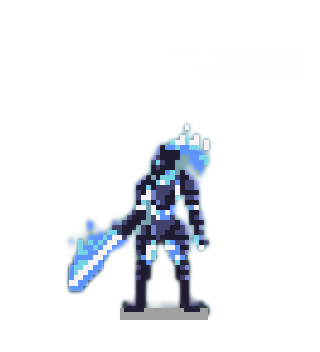 ) I have a stock of sprites that my friend has given me so if you want an avatar just tell me what you want it to look like(i have dragons, golems, robots, elementals, pretty much everything! Just let me know(if you have a complicated name for your flowlab profile simply tell me what you like to be called in game instead, of course if your name is something like hililogic or something hard to implement like that i could always make you a cyborg or a robot, its up to you guys though!

Do they all feature the same art style or do we make up our own sprite?

If everyone did their own sprite, the game will have a lot of different art styles and wouldn’t seem right.

I’m assuming you want us to base our sprite around the character given, right?

I was meaning you say what type of sprite you are looking for, then I will look through my collection or ask my friend for said sprite, if i have multiple i will present each, like “hey I want a Cyborg” me: “Ok let me see what i have in me collection!” and present all options. you may create your own sprite, but you dont have to do the animations, we got that covered!

So we just suggest a character and you see if you have it or not?

Yes, re-read the comment i edited it, If i dont have that sprite then i will see if i cant get my friend to make one.

but i will need at least 6 different animations, 1 for attack, idle, run, damaged, die and(optional) taunt and/or special attack, if you want i can just edit the animation for certain attacks(more like copying the animation and pasting certain parts to make it a certain attack, not creating its own animation)

Sorry for this but you have two options, to create it as a sprite(with the same style as the one i had to represent The Undying) and have all 5-6 animations, or decide what type of sprite you want and i will search through my list, Also know that the characters within the game are based off of your AVATAR. if you have any more questions simply ask.

I dont have a sprite for reality glitch, that sprite is for the Undying which was my old account that was mysterously deleted.

Dex is not your OC.

Grrrrrr, the image i posted is the main Villan, The Undying, not Reality Glitch.

That matches the art style, and has the 5 required animations, it can and will be used! Please note that if i implement this it will be refured as puginarug and will be your avatar, are you ok with this?

yea, sounds good, i can also send the animations separately i you’d like

If you want, i do have a tool that can seperate the frames from animations if it is too tedoius, i dont have a team yet, would you like to make a team and invite me?

Online tool for cutting image sprites (sprite sheets). Enter tile size or number of tiles (columns and rows), and it will slice them to individual images. You can download images in a zip archive or create a GIF animation.

Upload animated image (GIF, APNG, WebP) and this tool will convert it to PNG sprite sheet. It extracts animation frames and stacks side by side or one under another, generating a single image file.

It kinda sounds like you’re saying you made these sprites when you didn’t, so I think that should be clarified.

Of course! I haven’t ever worked in a team, so this will be some good experience.

“I have a stock of sprites that my friend has given me” i didnt have it i,n the origional post but i did mention it later on.