Is the Livestream Too Early?

I’m just curious - Is the livestream time of 11am Central / Noon Eastern too early? Would folks rather I streamed later in the day?

Thanks for the feedback

I’m on the west coast, for me you start the stream before I even wake up.

There is a five hour time difference between coasts.

I’m a late sleeper, on some occasions I’m still asleep before it starts (it starts at 11AM)

Right - misread that lol, my bad

There is a five hour time difference between coasts.

Actually, no… unless you’re including Hawaii and Alaska, it’s only a 3 hour difference. 12 p.m. EST (Maine down to Florida) is 9 a.m. Pacific (Washington, Oregon, Nevada, and California).

I know this because I live in Ohio, my mom lives in California, and my dad lives in Utah. Ohio is EST (same as New York, Maine, Florida, etc.) so if it’s 10 a.m. where I’m at, it’s 7 a.m. in California (and Nevada), 8 a.m. in Utah (Mountain time). So if I have to take that into consideration every time I call them.

I can see where you got the 5 hour number from though, as there are probably 5 time zones total, as not every state observes Daylight Savings, and a couple of states have some really weird regional time zone stuff going on even between one city and the next. And it takes at least 5 hours to fly between the coasts (depending on the jet stream; 5 hours nonstop if the jet stream is behind the plane, 6-7 hours for a non stop flight if you’re heading into the jet stream). But in general, in the continental U.S., the time difference between the east coast and the west coast is 3 hours.

As for my personal preference, I am mostly a night owl, but there’s no need to cater the streams to me and my weird schedule. I’m just thinking that many people might be at work or something between 9 a.m. to noon. Maybe later in the afternoon / evening would be better for them?

When we flew back to Chicago from Guatemala, the flight went from a 4 hour plane ride to a 5 hours plane ride…

Joking, it was the same time, but the time jumped one hour… so was it?

Guatemala is Central Standard Time, Chicago is Central Daylight Time. They don’t observe Daylight Savings Time in Guatemala, thus the 1 hour difference. If you were to fly there during the North American winter, the times would be the same, because Chicago time will have “fallen back” by one hour.

Ah yes, but it’s not winter my friend.

…I can time travel

That is, I can time travel, but unfortunately only in one direction.

I’ve got an Australian buddy in a gaming group I’m in. Sometimes I’ll log in and say something like “happy Friday night everyone!” and he’ll laugh and say “it’s Saturday afternoon here”. Wow! Australia is in the future.

I used to fly across the country regularly (west-east coast and back). It always threw me off. You can get a nonstop flight that will take 5 hours (give or take depending on jet stream and weather conditions) each way. But I would depart from Los Angeles International (LAX) at say 6 a.m. Pacific time and land in Washington Dulles International (IAD) at 2 p.m. Eastern time. Then return flight, I would leave Washington Dulles at say 4 p.m. Eastern and land back at LAX at 6 p.m. Pacific.

Hence the term “jet lag”. One day your body thinks midnight is midnight, then suddenly your midnight is actually 3 a.m. So you try to adjust for that, then you fly back, and your “new” midnight flips all the way back to 9 p.m. And that’s just U.S. transcontinental flights! I can’t imagine how screwed up someone would be if they were constantly flying all across the globe for international business meetings or something. Like you have a business meeting in London, then another one scheduled the next day in Tokyo… that lifestyle must wreak havoc on the internal clock.

In conclusion: I woke up at 6am Guatemalan time (don’t know the time-zone). 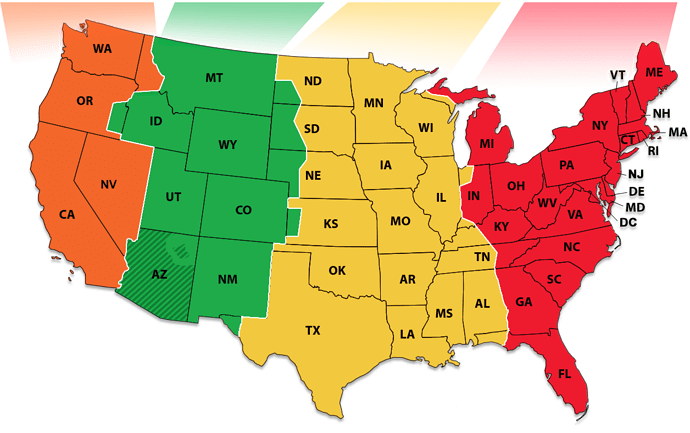 If memory serves correct - you, me, and grazer are all in the RED region.

Almost half (47.1%) of all Americans live in the EST zone, actually. 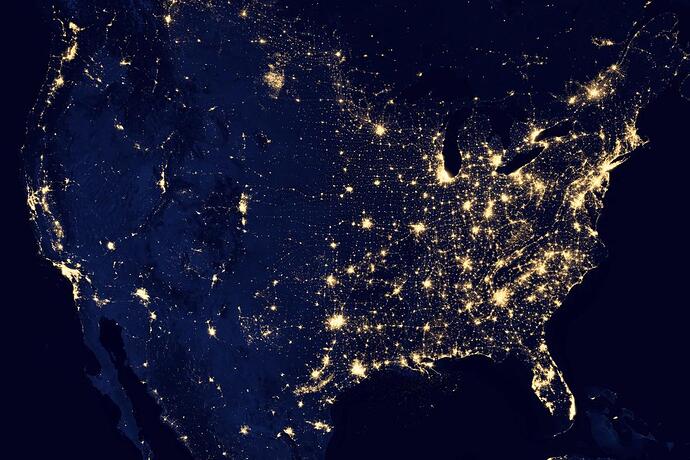 LOL they’re not all in the same time zone, though. Allegedly, the happiest state is Hawaii, which isn’t even in the continental U.S. I guess I’d be mostly happy too if I was living in a tropical paradise.

(which is not to say that I’m unhappy - I’m happy most of the time, except for when I’m having a bad day, and that can happen in any time zone)