Maniac Pumpkin, read this! [I datamined "The Facility"]

MANIAC PUMPKIN I went data mining in “the Facilaty” and found this,care to explain? 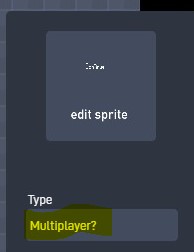 oh yeah,I call entity 007 Jerramy can you add it to the game somehow?

Editor Update Announce: The Update of Small Tweaks 🐞
The Original Glorious Off Topic Channel Of Destiny
DWGAMEMASTER January 12, 2022, 3:26am #2

you might know me from: Please give tips for my first game Maniac Pumpkin 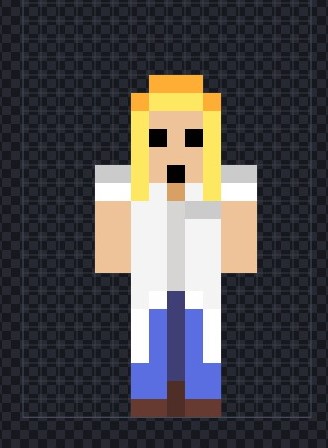 You may want to use “@” so they get notified.
@ManiacPumpkin

I just now saw this. It wasn’t popping up in the normal list of discussions for me so you might want to tag me if you need something.

Actually here’s a long list of what I’ve been doing for the game.

I was working on the game a while ago, which has been stopped since I don’t have indie anymore. What happened was that a friend of mine added me to his Teacher account so I was a student with indie access.
I think at one time I wanted to do multiplayer, but I don’t think it will ever happen.

Also the game is currently cancelled until further notice. But I have kept the characters in mind with documents listing individual entities and the overall lore and story. So the Scepter Foundation is just as alive as it was.

One quick thing to announce is that Subject: 007 has been changed to Subject: 009 (cause i got the number mismatched a while ago) but I never changed it in the game cause it was cancelled.

Subject: 007 is actually a table entity with weird trading properties, which was to be added. Well it actually is, but the main game was sealed off to the public.

Anyway two flowjams ago, I made a game called Flee where it features Subject: 002, the Famine Slime (not sure of the name yet) the game kinda shows some of the character, but not exactly what it really is. Also there is a scene and chase scene featuring Subject: 009 or “Jeremy”.

That game scored 4th place in the flowjam, and I figured that since it was so good, I thought of doing another Facility themed game.
I’ve been heavily working on a game, that won’t be released until either the flowjam ends, or in a few days, depending on progress. It’s gonna be a smaller version of The Facility where you play as Subject: 005, a new entity within the list.
I don’t want to give to much out of this game since it’s still early development and because of the flowjam, I want to keep most of the gameplay a secret. Let’s say it’s much better than the facility, since it features better AI systems, and better art. The gameplay might not be as good as what The Facility was intended to be, but it’s still pretty good.

I hope this helps explain a little bit of what I’ve been doing with the game. I might end up removing The Facility and redoing the whole game at some point, but who knows.

what do you think of this: the blood night,its a red suit of armor that comes alive
at night heres the sprite its actally a charather from my game so its like cross other

Well, I said that The Facility is currently cancelled until further notice because of indie issues. Also I wasn’t planning on taking any more character requests for the game, but it does look pretty cool.

I might end up changing the entire art style to what I have for my latest game. Which won’t be released until the flowjam ends.

Sad to say, but this artstyle is what it might end up being, at least for any future Scepter Foundation games. 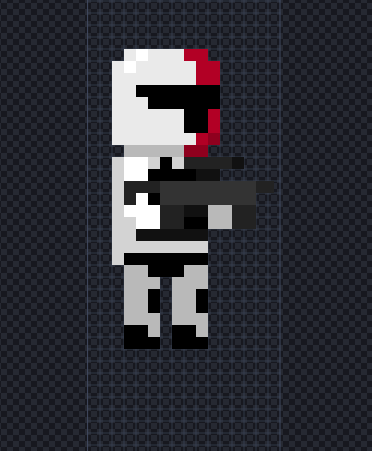 The old Artstyle was decent and added more depth to the characters to make them seem 3D, but in my opinion they weren’t the greatest, mainly since that was an old game I made.

thats wayy better but I dont like the red.
anyways i did a cool reskin!

wanted to have player walking past gaurds but couldnt do it. sorry if i bugged you.

Were you editing my game? Or did you have your own game that you copied the sprites from?

Anyway the red line going across the Guards helmet means that he is an Elite Guard. There are normal Facility Guards that just have a plain white helmet, like the ones you have in the images.

ok. i edited your game and i also data mined the mane game.
plz dont add ending where player carather dies caus it really annoys me. 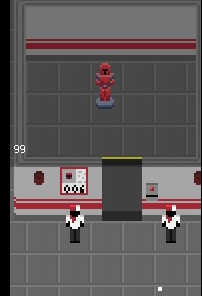 can you spot the difference?

i edited your game

You know when you edit someone elses game it don’t save, right? So everything you did is just gonna get deleted. I was asking if you edited my game earlier cause I wasn’t for sure if you knew that.

Also player carather? Are you talking about the current death scene that I have?

Yeah you added red overtop of the Facility Guard’s Helmets.
Not sure if its blood or what, but the Elite Guards have a stripe going down the left side of the helmet, and it only covers the helmet, not the armor. Not sure if that’s what you based it off of, but I figured I would say something.

no i mean that scientist you play as lets call him danylo.

srry i was going for the elite gaurd desighn