Hmm… I see nothing wrong here. Hey, wanna go to the casino? Lol

Hello, everyone! G here. It’s that time of year; so I’d like to wish you all a Merry Christmas! You guys have been there for us, the community, all year, and in this year’s message, I want to commemorate that. Throughout 2020; we’ve faced hardships incomprehensible to us a year prior, we’ve been through things very little people would have been able to say they’ve been through back in 2019. Yet still; we’ve prevailed through this tough year and stayed the same, wholesome community we’ve always been.

So if you’re new to the community, a dinosaur like me, or one of the original founding members of this little world we call home to our creations, I hope you’re having a wonderful Christmas (or December 25th haha) and a happy New Year’s. 2021 is going to be a fresh start. And 2020 was a learning experience.

I don’t know how many of you can say the same; but even through 2020 being the hardest year I’ve experienced, I’ve also learned infinitely more from it than any other. I am happy to say that I’m a changed man; and I’m realised that I wasn’t the person I had wished I was last year. Quarantine gave me time to reflect. And I hope it did for you guys as well.

I love you all; Merry Christmas; from ViperTeck Entertainment Studios up here in Foggy-as-Hell-rainy-instead-of-snowy Oregon (=

My Studio and I are looking for experienced music creators who'll work for free! Art & Sound

Hello, everyone! G from ViperTeck Entertainment, here. HAKK3R 2’s been coming along great, but there’s one huge problem with it. I hate the music I’m making for it with a burning passion lol SO; I go to the forums for your guys’ help! Can anyone here make music that has a Cyberpunk-y aura to it, like this? I don’t have any money, can’t even pay my Indie account bills right now, so I can’t pay at the moment. [Cyberpunk 2077 OST - The Rebel Path] [Cyberpunk 2077 OST - There…

We’re once again searching for people to add to our team! =D

Emperor is officially getting the redesign and story-rewrite he’s desperately needed for quite some time! Looking forward to showing you his fixed character

Aaaand it’s here! The beginning of texture update 2! This one? Characters. And once again, I’ll be using Emperor to proudly display the progress I’ve made. Just look at this comparison! 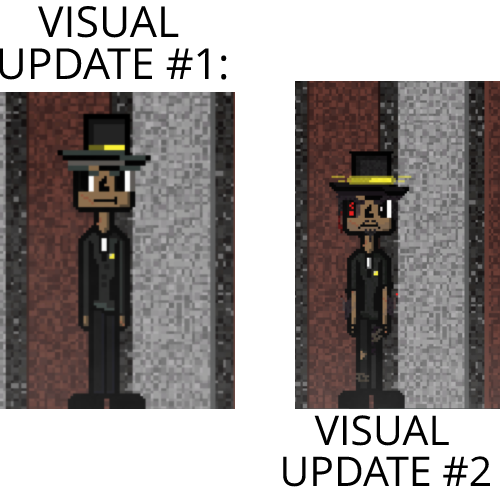 As you can see here; not only does Valinsky have much more detail, but he also has more of his backstory and personality shining through, alongside showing off his renowned taste in cybernetics and body modification.

But I can’t quite talk about the character’s origins just yet; that’ll have to wait a couple years… (;

Looking to get your fill on all the characters in HAKK3R 2 so far? Well I’ve got just the thing.

Introducing the major character’s cast of HAKK3R 2! Check back often; because the list updates a lot (;

Will there be common, of-the-street NPCs as well (civilians or landscape NPCs, basically)? And would you make it so we could interact with them?

Indeed there will be! The more you complete the story; he more they’ll have to talk about, and you’ll be able to tune in and listen to them using local surveillance. In total; there will probably be about 500 unique lines, and about 20 different voices.

EDIT: And yes, you’ll be able to interact and talk with the few passive NPCs that there will be.

That’s gonna be some very lengthy testing for sure XD

I just spent about an hour trying to make sure the menu fades properly between going to and fro the game will making sure the camera doesn’t screen shake when it’s not supposed to (those two things were somehow connected lol). I can’t imagine the absolute joy of checking that code to make sure it doesn’t have any loose ends

lol actually shouldn’t be too hard, just repetitive as hell lol
But if I do it in bundles, then it should only come out to one bundle per major event in the game. So a lot, but still not nearly as much complex checking as I would need to do otherwise

Definitely. With my previous stuff, bundles were practically non-existent, but with Sol, I’m possibly using way more than I need to

But it really helps with organizing things out. I’ve also used so many more messages since A-Box, it’s insane. Though with Sol, I’m just putting my all into making it look and feel great, so I feel the end result should be alright.

Organisation is key! One of the big reasons I pretty much restarted HAKK3R 2 from scratch. It was buggy and felt wrong to play, the exact same thing HAKK3R 1 fell short with.

I’m not sure if I asked already, but is there going to be a HAKK3R 1 remake, in any potential plans? I honestly couldn’t finish the game because the enemies didn’t seem to want to die XD

haha yes there will be! HAKK3R 1 Remastered is definitely a planned project, but I highly doubt it’s happening any time soon.

And haha yeah, the enemies in HAKK3R 1 were tough! But surprisingly enough; no, there weren’t any bugs with their health system lol

Hm… I need to re-evaluate my 2D gaming skills, then XD

Then I’d have to say, in HAKK3R 1, a great helper would be to have mini-health bars over the enemies and bosses, just to let the player know if their attacks went through, because personally when I attacked in the game, I didn’t know if I was actually doing any damage at all.

haha I like that idea! I’ll keep that in mind when I start re-developing the enemies of HAKK3R 2. And also I imagine a big part that played into it was how prehistorically un-advanced the combat system was; enemies didn’t take knockback, nor intelligently pathfound at all; I don’t blame you for being confused XD

It’s all good XD I was, however, very impressed by the introduction of the game. When I first played it, wasn’t expecting the main menu to have that much influence on the narrative.