With the election coming up it seemed like the perfect time to release my new game:

Let me know what you think.

P.S. Remember to vote on November 3rd… for those of you who are old enough. 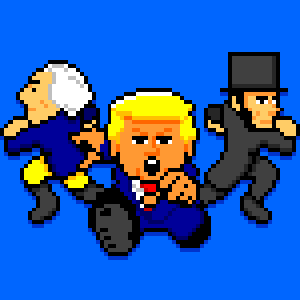 If you want to make the game additive like putting coins to unlock skins to make the player stay on the game longer. Also putting beautiful gifs and advertisements would help. Like posting every week. Gifs of the game to make traffic.

And you could change your username if you ask grazer.

Thanks @R0CK, the goal of the game is to go from Washington to Trump, so the longer you play the more the character skin changes.

I could speed up the game, but then the characters might change too quickly. what do you think?

Also, I’m poor, which is why I have a few usernames. Some day I’ll be able to combine them, until then…

Adding an unlocking structure or a shop would make it more addictive and more fun. And making gifs and images every single week and posting it would make traffic.

Ohhhh… I like Cyborg Trump. Currently the game goes until 2020, but will continue to be updated with new presidents.

I was thinking about a high score, which would give you more incentive to continue to play.

@Bmarzi, Ye that would be fun. Like adding a high score and connecting to all computers to that high score and if somebody beat that person, the other person would try to beat them and they would be coming back constantly to the game.

I’m not sure how to do a community high score… I thought the save behavior was only local. I’m going to mess around and see if I can figure it out.

One thing that I found while playing was that if you have your player stand on a line you can go one forever because if you keep losing hearts you can regain heart as you are just standing there. Other than that it’s a pretty good game and I hope you continue to work on it.

Statistically speaking, it is possible to stand there and not move and beat the game because the items are emitted at random.

The game is actually super cool, but it got really laggy when more coins and hearts started spawning. Although I couldn’t move anymore so I stayed on the far left side and I beat the game after a few minutes, lol.

Any suggestions on the lagging issue? do you think it has something to do with “emitter” behaviors?

I think it does, but It probably only effects me since I have a really poor device. Maybe keep the hearts the same, but decrease a coins a little or stop the coins from overlapping each other. Other than that, the game is super cool. Love the art style.

Haha I liked the game, you should consider put some sort of progress in it.

Things I liked a lot:

Things I liked not as much:

yah i agree with grazer, if you stay in one spot you can win, since hearts are so frequent.
moving is what killed me

also, i think snapping to lanes would be good. bc if you stand in the middle of two lanes you pick up twice as much stuff

Thanks everyone for all the ideas…

@grazer do you think I should slow down the bullets? What about the hearts and coins? Also, do you think game is too slow (i.e. the time between each president) since it is repetitive?

@F3Art I like the idea of “snapping to lanes”. How do you feel about the game speed?

i think that switching between president could be a points thing, like collecting enough coins could switch to the next president. unlesss that’s already what it is. (I don’t really know how it works.)

i found president switching to be a bit confusing.

and i think bullets could be slower,(like grazer said) the same speed as everything else.