Hello,
This is the first game which has been jointly released by myself and Scoundrels, an NFT roleplaying community that loves games. Like Dungeons amd Dragons? Roguelites? Roleplaying? Action fantasy? Well, this is the right place for you. I proudly present to you months of a development team’s hard work: Dungeons of Dragonstein! 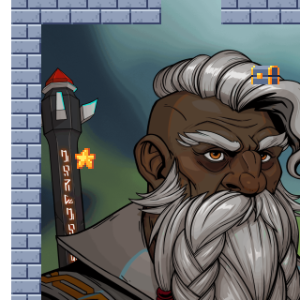 --- <div align="left"> Welcome to the Dungeons of Dragonstein! Set in a time long before Scoundrels tamed those nasty beasts. A world that today seems topsy turvy as Dragons have become our trusty companions. --- <div align="center"> # Game...

Tell me if you find any bugs or glitches, as this is a demo. Thank you all!

Nice, but why does it have to be associated with NFTs

It was a marketing decision, the deal was I get funded and they get nft advertising

Question though, why not just put it on itch, newgrounds or a kickstarter?

Because I wanted to keep it free and we have a website for the game already.

Is there any gameplay feedback? It’s a really early demo so I’m expecting bugs.

in terms of gameplay, it’s extremely shallow. the enemies do stupid amounts of damage, the attacks feel very weak and unimpactfull, you move painfully slow, the tiefling dies stupidly fast and the dwarf’s axe throw has no range and feels terrible to use and it lags horribly, in short the gameplay feels extremely bland, boring and just not fun, oh and the elf is stupidly slow

The game does not work well, as do most flowlab games, when you are using low-end devices.

So I experience absolutely no lag on my horrible Chromebook so that’s great.
Now a few things to improve:

I’m just naming stuff that needs to be improved not any of the things I like, like the blood effect.

Some of the things puginarug said are valid points, but it is rude to try and sound like a master when he’s not.

yea i agree with everything you said

That might be on your end. I tried the game and I never experienced any lag.

Thank you for the information. I am working with two artists with slightly different art styles. All the graphic upgrades you are talking about I can improve. Only the skeleton should be shaking, and that’s a lot harder to fix than the basic pathfinding. You can take a look if you like.

The gold has to be saved in between runs for the purpose of the marketing tactic. It’s for a competition we’ll be hosting once a month. If you’re not interested at all in score you can always click tab.

No assets have been used, everything was made from scratch.

So lol… About the elf. I have had so many people tell me the dwarf is too oo and the elf needs buffed that I’ve kind of determined it’s balanced sin e everyone thinks every character is op.

The menu screen is filled… You just don’t have everything unlocked so it doesn’t show. Beat stage one to unlock the first secret.

wait a minute, the game isn’t laggy for me it just feels so painfully slow

That’s actually next on our to do list, so got you covered. Thanks for the help!

What do you think gameplay wise? That was a lot of aesthetics that definitely need improved. Do you think there’s potential in the core? What should be changed there?

I could probably make this better now, but this is what I gave glitch in December to fix the enemy shaking when they reach the same X/Y position as the player