Sending Text Through A Message

I did it once again, the “Impossible” (meaning people haven’t tried hard enough yet). It’s actually a really simple system that took me about an hour to figure out (could have been faster but I discovered a bug).

In the Messaging Object 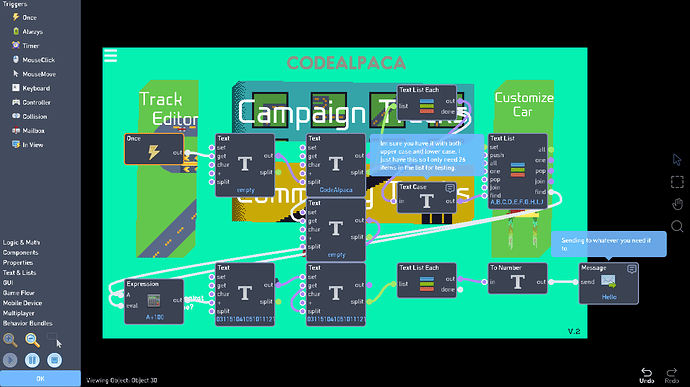 In the object getting the Message 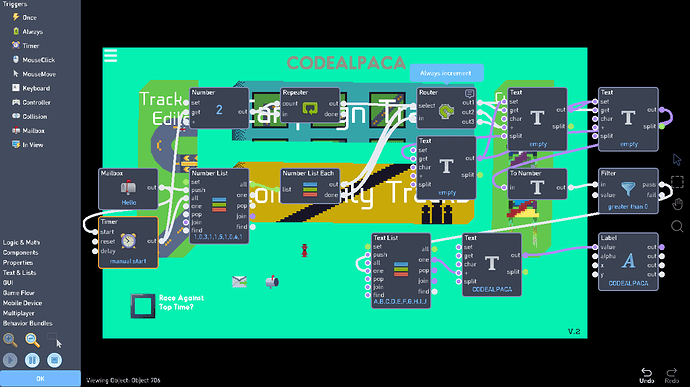 @Samuel_PixelPizza in case you wanted an in-depth explanation of how the system works.

If anyone sees any flaws please tell me so I can fix them (Besides having to send a lot of messages because I’m using a List Each in the Messaging object. I would have used a To Number and just converted it in the object getting the message but Flowlab doesn’t like long numbers I guess

I also discovered this bug so the system is not as clean as I would like.

Please have an option to show the FULL number Bug Reports

So I have a number that is 30 numbers long, but I get this as the output 1.0311510410510112e+29 And while mathematically that is fine, if I try to display it in on a Label, or use List Each it will output the letters as well which is incorrect. I am able to add it to a Number List even a Number behavior even though letters are included.

2 Likes
Please have an option to show the FULL number
Labeling players for multiplayer
CodeAlpaca May 2, 2022, 2:09am #2

I would create my own “Bundle Library” for these systems I make, but I’m a little short on games

wait so what is the problem exactly? it looks like it should work to me

It works fine, but it’s not as clean as I would like. (I would prefer to send one message instead of a ton through a List Each)

as in, sometimes it isn’t the right text? or it takes too long
Edit: nvm

It takes a single frame to do it and it gets everything correct, but idk if having a lot of messages sent to it at once could mess it up. I tested it with over 100 letters and it worked fine, it’s just that I want the code itself to be cleaner

so if you wanted to send the whole list as a single number, you would have to designate something to separate each index. For example, if you designate 9:

The receiver can set it as a text and then split on 9’s
The only problem is that there would be numbers that include 9 like 9,19,29,etc.
One solution I can think of is to just not have any letters on these indexes in the “alphabet” list. Basically create an empty space on every index that would have a 9. That way you will only have a 9 in the sending number to separate indexes.
It’s kind of a stupid work around but it’s the only way to combine a list into a single number that I know of.

ohhhhh I get it now.
Welp I don’t think there is any other way to send a whole list through one message…
The best way to do it is how you did it basically, so as long as it works I wouldn’t worry

@JR01 sorry to ping you, but just wondering if you notice any flaws with this system. It works fine when I tested it, but in case you know of any problems that can happen if there are multiple messages that are being sent that would be nice to know.

That’s really cool, though the code seems a lot more complicated than it needs to be

You’re limited to the 32bit integer limit,
for sending text specifically, it would be better to use a list global.

List Globals were what I was using before (for the Label bundle).
The problem is that the Globals aren’t directed to individual objects. @JR01

I’m using a List Each because flowlab doesn’t allow me to send a long string of numbers.

The code isn’t more complicated than it needs to be, it’s pretty simple (I had to work around a bug so it’s slightly bigger than I would like). I also only spent about an hour on it so there may be an extra behavior or 2, but not much.

Also, Samuel does this help with your problem?

The system was originally designed for only having to message the object once, otherwise if I knew that flowlab didn’t like large numbers I probably would have just made a system similar to yours.