I tried playing around with creating the increasing push back style of smash bros and got a cool fighting system out of it. Here it is guys, feel free to disect it and use it for yourselves!
Got the idea from @Luminous700, from his epic game! SSBF RESET. The one thing I just could’nt stop thinking about was knock back, I could only seem to knock the red player to the right, where as in this system, the target can be knocked back in either direction. Also, in the end of a “combo”, the target is launched into the opposite direction. One “combo” consists of 3 hits and with each hit, the damage percentage increases, as expected.

Also the Smash Bros jump through platforms have been added. (Beta)

This is just the basic combat system, I just wanted an increasing push system.
Disclaimer, I DO NOT OWN GOKU. IT IS PROPERTY OF DRAGON BALL Z!

wow! thnx now i can use negative number knockback!!

@Luminous700 , also just added the jump throught platforms, the ones where you can jump through but land on too!

AWESOME I thought I’d never get to that part… thanks!!!

ah… i dont think im gonna be able to use that… i have to create seperate objects for upper platforms but i dont have enough… i dont want the characters to be able to go through the base platforms. ;-;
but the knockback i can use it. thnx so much for the help!!! xD

Here, I did one a bit differently, go try it out.
http://forum.flowlab.io/discussion/2645/my-smash-engine 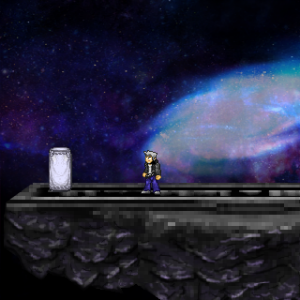 This doesn’t seem to do anything for my computer. Goku can move a bit, and gets pushed above that platform, but after a bit, none of the buttons work anymore, and he gets stuck. The target also does not seem to move, besides pushing it.

everyone’s got at least one smash game going on

howd you get those graphics?!

I could do better, and animate it. Make waterfalls, water sparkle and splash, grass move in the wind, clouds move, I just don’t want to put work into a test engine.

Then why not make it an actual game!

Thanks guys, @“Mhx Ar” , you got a nice system going. Looks GREAT! Mine is still in beta, I litteraly spent about 2 hours making this, it was just a thought I had and wanted to try. Hopefully I will be able to accomplish as much as you have.

Yeah, I only spent about 3 or 4 hours on mine. Most of it was graphics or playing it. I want to work on a Y scale, so you can attack above and below, for spikes, and smash them into the abyss.

@“Mhx Ar” , had the same thought, First off I need a respawn just like you do, makes it annoying if you have to keep restarting to bring the target back.

We could totally put these systems into one gigantic epic one, lol.

Also I had a thought about an ips adress connection and know that it works locally, tried it on parents’s pc and controlled a character in game with their pc’s keyboard when it was connected to my laptop. Though there are some concerning things with wireless connections, so I connected to an account with restrictions and that seemed to work too. Again this is only a local connection, I just don’t know how big of a distance that this would allow for someone to connect to. I was just playing with the whole windows 10 server thingy.

Maybe thats a good way to have respawing