The first sprite kit available is Froggy Forest by @Baron_Wasteland. It’s more than 150 sprites to start your game with for only $7, and all proceeds go to the artist.

I’ll be adding some additional sprite kits soon, with the intention that this can become a helpful resource for both devs and artists 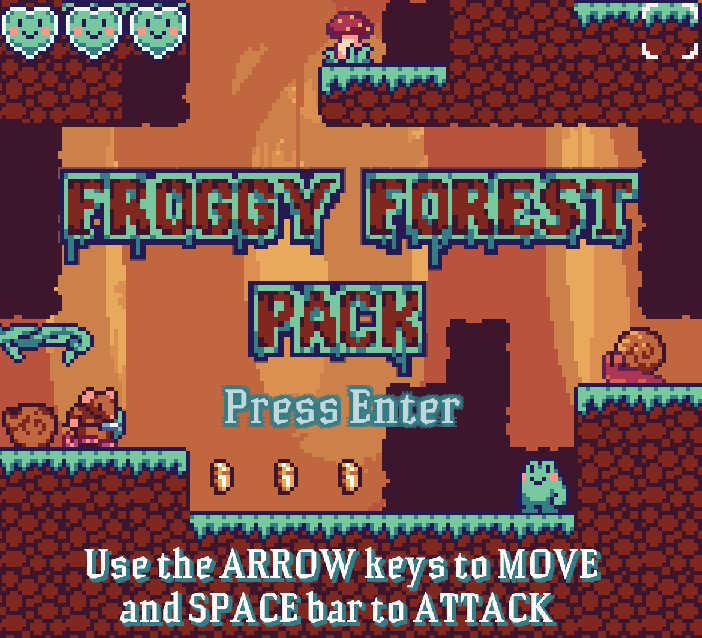 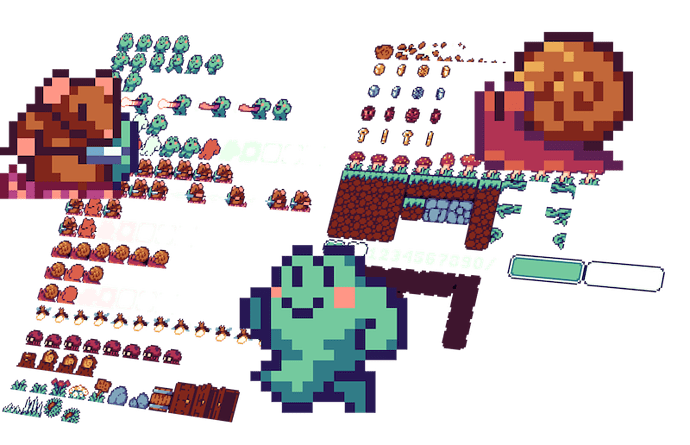 It’s really cool to see a sprite shop on Flowlab! Also cool that it’s got sprites from a community member. Can anyone contribute to the store or only specific members?

Well, the submission process has to go through me at the moment, but I’m not sure how it will be in the future. If you have some ideas for a sprite kit, let me know on discord and we can discuss it.

Is there an example game or something, so we can see all the sprites?

the second image shows the quasi-totality of the sprites, just tilted.
I also have a list of everything included in the pack:
Animations for frog character including:

Animations for two enemies including:

Background (Front and tileable back)

@grazer this is awesome!
@Baron_Wasteland Great work, hope you make a few sales!

Hey, just a note - I’ve just pruned off a lot of this thread, so I wanted to clarify:

This thread is to announce the sprite shop, the entire point of which is to support the artists and developers in the community (All of the proceeds are going directly to the artist / none of it to Flowlab)

Even if you don’t like the idea of using sprites someone else drew in your game:

It’s not just sprites, but you’re basically buying a world. There are over 150 sprites with animations for player and several enemies, environmental objects, 2 tilemaps, User Interface, background and wallpaper.
There’s also another background object that can be applied with the wallpaper that isn’t shown.

Also using sprite packs is great for adding little details or additional styles in a game your already making.

And making games with sprite packs are great for practicing to make games. Here’s a game I made by using many different packs:

Hey, this is really cool @grazer and @Baron_Wasteland! Quick question, how do I access this from the main site?

I like the idea, and I had mentioned maybe making a sprite pack of my own but releasing it at a lower cost, and that was shot down because it would dilute and cheapen the market… I’m certainly not trying to steal sales from any other user, but I acknowledge that my artwork probably wouldn’t be worth $7, and I also figure I’d get more sales if I priced mine at $1. I’d rather sell 100 sprite packs at $1 apiece vs. only selling maybe 10 at the $7 price mark. Many of the users here can barely even afford computers or Indie subs, I don’t think there’s going to be a lot of demand for sprite packs that cost more than $5, imho.

And no, I’m not saying that to step on anyone’s toes or pressure anyone else to lower their prices or anything like that. But I personally would never want to charge anyone more than a dollar or two for access to something I created online. For two reasons, one selfless and one selfish. Selfless because I want my work to be affordable for everyone to enjoy. Selfish because I figure I’ll get a lot more sales if I set a low price point. Especially since I don’t have a known name or the backing of sponsors or anything like that.

And third reason, my artwork is honestly not good enough to be worth $7. I’d like to be the generic dollar store version of games and sprite packs.

Fully understandable if that is not what you’re looking for, I’ll try to monetize something else on my own, or something.

I say go for it @TGW, the market is always open for assets to use. Cheaper knock offs would be great as placeholder art to test game mechanics, animations and temporary art. There isn’t really a demand for priced assets, but also you can say the same about premade assets at all.

But like I was saying earlier, having a full game of assets really helps to practice a making games. I’m sure many of us would probably purchase a pack for Super Mario Bros. (Nintendo copyright) for $10 just to see what it takes to recreate it.

Also to mention, the old packs that was available in the Flowlab store were space themes at around $30 each (which let’s be honest, not even me would try to purchase at that price). And finding non-free art or packs for a game on itch.io can vary around $10.

Prices you would find on itch

But yeah, go for it. If it seems useful or something I could use for a game, I would look into buying something like that for sure. Baron’s sprite pack was a great test for me to see what it would take to make a platformer (which I re-used the code for Dungeon Platformer).

I do know there is a market for stuff like that. Heck, the last mobile game I played, people were spending hundreds of dollars to gamble for a chance to pull one stupid hero. That’s actually what drove me here. I figured if people were willing to spend that much money on a mediocre game, surely I could make something that people might be willing to spend a dollar on. Just one dollar a day can feed this poor TGW… LOL. Seriously though, I’m not looking to get rich, but I’d love to be able to pay at least some of my bills doing something I enjoy.

In order for me to even list a sprite pack on here, I need approval. Of course I would be making at least 100+ sprites/animations per pack, but I don’t want to go to the trouble of making them only to be denied from listing it.

I’ll probably need to make some more stuff on here and get recognized before anyone takes my work semi seriously. I’m working on a game trailer for a future game I plan to make. When it’s finally ready to be released here, I think the overall forum reaction to it will be the deciding factor on whether or not I have “what it takes” to be successful in this industry. If not… well then making games will just be a hobby for me going forward, and I’ll just stick to working crap jobs for the rest of eternity.

Looking forward to it,

You can also sell on sites like itch.io for free if you don’t sell on Flowlab, but I would also practice with just a handful of art first. But yeah, making more games with your art would help as well; like how me and Baron have been doing in the past few Flowjams.

My first game on here, I made with the default sprites (edited them a little bit). But I’ve decided to use only custom “artwork” going forward. Not to say that it’s necessarily good artwork, it’s meant to look 8-bit, old school, blocky, arcade-ish, with Lego man / Minecraft looking characters. Because this is Flowlab, not Unreal Engine. Hence the $1 price point.

I also don’t expect to be able to freelance in the field full time, at least not yet. But it’s always been a dream of mine to get paid to do something I actually enjoy doing. I figure if I create 1000 different things and sell a few copies of each at $1 apiece, I might actually be able to make a decent living from the comfort of my own computer desk.

That’s the long term dream, anyway. Next best current offer I have on the table is going into a food truck business.

I’m the type of person who would take premade art and just focus on the programming heh. If you seen this image, you can see I usually try to avoid the art field when I can: My art vs. Baron’s art

But that’s understandable, I’ve worked dollar stores, custodian, and now on computers.
Game development has been a large part of my total free time in the past few years (around 4 hours a day).

Then when randomly Googling stuff one day, I found this website. “Make and sell your own games, no coding experience required”. I thought, why the heck not? Worst case scenario, I make some games that only I enjoy playing, but I’ll have fun making them. Best case scenario, maybe I can earn some money from it. Sure would beat any other job I’ve ever had.

I’ve actually been “designing” games for years, I just never knew how to turn them into workable video games. I even considered making board games instead, but nobody really buys those anymore. So I already have a million ideas for games, and the artwork isn’t even the hard part for me. The hardest part for me is making sure the code works the way I want it to. Once I get that part working more or less the way I want it to, the rest is smooth sailing.

I like the art for this one! Are the packs from the old sprite store gonna be added?

Hey @TGW, Sorry if I wasn’t clear, but I meant that I didn’t want to put free sprites in the shop (also the shop doesn’t support free “purchases” right now anyway).

The entire shop concept is an experiment, so it may take some time and revisions before we get the kinks worked out. Mainly, I wanted the sprites to be cheap enough for nearly anyone to afford pretty easily, so less than about $10. I think $1 is fine, but obviously you’ll have to sell an order of magnitude more sprite sets to make the same amount of money.

If you (or anyone) do want to make a sprite kit, just DM me in Discord, and we can discuss the details of what you want to make. I can provide you some guidance as well as you go, so that the final set will be a good fit for the shop. The general idea is that an ideal sprite kit should:

If you want to give away free sprites you can just post them here, as in on the forums